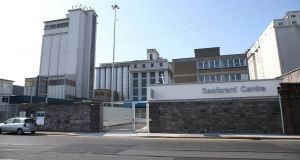 Dublin Port Company has invested €500,000 in a new Seafarers’ Centre at Dublin Port. It is housed in the former Odlums workers’ canteen.

A new centre for seafarers has opened on the site of the old Odlums flour mill in Dublin Port.

Based in the former Odlums workers canteen which has been dormant since the plant closed in 2012, the centre will have cooking and dining facilities for visiting sailors, as well as recreation facilities including a TV den with beanbags and is wi-fi enabled.

It is Dublin Port’s first custom-built centre specifically for seafarers and will cater for some 7,500 sailors primarily from India, China, Ukraine, Russia and the Philippines who visit Dublin annually.

It also features two religious missions – the Catholic Apostleship of the Sea (Stella Maris) and the Anglican Mission to Seafarers (The Flying Angel).

The centre came about following a €500,000 investment from the Dublin Port Company, and the International Transport Workers’ Federation contributed €55,000 towards its completion.

An opening ceremony this morning was attended by Lord Mayor of Dublin Críona Ní Dhálaigh, whose office comes with the honorary title of Admiral of Dublin Port.

“I commend Dublin Port for creating such a welcoming facility for the thousands of seafarers who visit our shores and make a valuable contribution to our city and society,” she said.

“It’s wonderful to see the Catholic Apostleship of the Sea and the Anglican Mission to Seafarers working in tandem to continue their respective traditions of caring for seafarers, and providing these workers with a home from home,” she added.

Architectural features of the old canteen such as wooden decking and beams were preserved as part of the renovation.