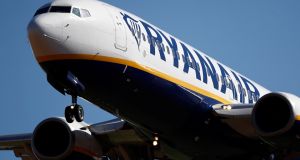 Ryanair said it would close its Eindhoven and Bremen bases in the Netherlands and Germany respectively. Photograph: Reuters/ Christian Hartmann

Ryanair’s shares closed down 12.5 per cent in Dublin on Monday as the airline issued a profit warning, citing higher costs and weaker fares due to recent strikes, as well as rising oil prices. It has also announced “modest” cuts to its winter schedule.

The airline said profit for the full year was now likely to be 12 per cent lower than expected, as forward bookings had been hit due to falling customer confidence amid a fear of further strikes.

It has also had to allow for higher costs in connection with compensation and re-accommodation for disrupted passengers under the EU 261 passenger rights directive, while its unhedged fuel costs have jumped as oil prices rise to $82 per barrel.

Ryanair said that 10 per cent of its fuel needs were exposed to market prices, as well as all of the fuel costs for its recently acquired Laudamotion business.

The airline has lowered its guidance from a current range of €1.25 billion-€1.35 billion for the full year, to a new range of €1.1 billion-€1.2 billion. The figure excludes start-up exceptional losses in Laudamotion which the airline said were expected to be about €150 million.

Fuel costs will account for about €30 million in increased costs. That means the airline expects the fallout from the summer strikes to cost it €120 million.

Ryanair blamed two strikes by staff across five countries in September which, it said in a statement, were “being incited by competitor employees despite the fact that Ryanair has agreed to meet union demands”. The airline was forced to cancel 190 flights last Friday as a result of the latest of those disruptions, with about 30,000 passengers affected.

Customer confidence, forward bookings and Q3 fares have been affected, most notably over the October school mid-terms and Christmas

Ryanair said fares would now be 2 per cent lower on average over the second half of its year as demand and customer confidence were affected by the potential for further strikes. The airline had previously guided that fares would be flat across the six-month period.

In its second quarter (to the end of September), Ryanair saw fares fall 3 per cent against a previous forecast for a 1 per cent rise in the price of tickets.

The airline now forecasts that passenger numbers for the full year be 1 million lower than previously projected, at 138 million, excluding Laudamotion.

Ryanair chief executive Michael O’Leary blamed two co-ordinated strikes in September by cabin crew and pilots in Germany, the Netherlands, Belgium, Spain and Portugal for the downgrade on fare income.

“While we successfully managed five strikes by 25 per cent of our Irish pilots this summer, two recent co-ordinated strikes by cabin crew and pilots across five EU countries has affected passenger numbers [through flight cancellations], close in bookings and yields [as we re-accommodate disrupted passengers], and forward air fares into Q3,” he said.

“Customer confidence, forward bookings and Q3 fares have been affected, most notably over the October school mid-terms and Christmas, in those five countries where unnecessary strikes have been repeated.”

The airline will now trim its winter schedule by 1 per cent in response to these challenges, effective from Monday, November 5th. The airline said it would close its Eindhoven and Bremen bases in the Netherlands and Germany respectively, though most routes would continue on overseas-based aircraft. The base at Niederrhein in Germany will be cut to three aircraft from five.

“All affected customers have been contacted by email/SMS this morning and will be re-accommodated on other flights or refunded as they so wish,” the airline said.

The airline warned the loss of services would lead to job losses, though it pledged to minimise those.

Pilots will be offered vacancies at other Ryanair bases, “but, as we have a large surplus of winter cabin crew, we will explore unpaid leave and other options to minimise cabin crew job losses”.

The airline said it could not rule out further disruptions in the October to December period, “which may require full-year guidance to be lowered further and may necessitate further trimming of loss-making winter capacity”.