Ryanair set a profit target of €1.75bn for managers in share options scheme 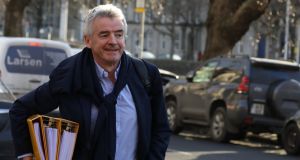 Ryanair set its managers a profit target of €1.75 billion for the 12 months to the end of March 2020 as a condition of benefitting from share options in the airline group.

The figure emerged in the High Court, where the airline is suing outgoing chief operations officer Peter Bellew to prevent him joining Easyjet next month. A restriction on reporting the figure was lifted on Tuesday by the judge in the case following legal submissions from The Irish Times and Independent News & Media.

Ryanair set the target of €1.75 billion in 2018 when it commenced a new share option scheme for around 100 of the group’s senior managers. The figure is one of the conditions for managers to cash in options awarded under the scheme in April and priced at €11.12. Shares in the airline are currently trading at €14 in the market.

Ryanair set the target before the full extent of the delays that have hit the delivery of new Boeing 737 Max 200 aircraft were known.

The hold-up prompted Ryanair to rein in its growth plans. Last month, it said that profits for the 12 months to March 31st, its current financial year, would be between €800 million and €900 million.

Mr O’Leary did not answer the question and told the judge he could not do so becase making public of any profit targets was a breach of stock market rules. Following an intervention by Ryanair’s senior counsel Martin Hayden, Mr Justice Allen imposed a restriction on media reporting of the figure of €1.75 billion but he would revisit that issue.

The Irish Times and Independent News & Media raised concerns last week about the order. The matter was due to be argued before Mr Justice Allen on Tuesday morning.

However, Mr Hayden said, after considering the matter, and the fact Mr O’Leary had not said anything in response to the question that breached market rules, Ryanair was no longer seeking to have the reporting restriction kept in place. Ryanair took the view the question should not have been asked in the first place, he said.

Mr Rogers said he was not making any comment about that assertion.

Share option schemes awarded by Ryanair as a bonus to managers are central to the legal dispute between the airline group and Mr Bellew.

The airline says that he agreed not to join any competitor for at year after leaving the company when Mr Bellew accepted 100,000 options in the company in 2018. However, Mr Bellew says that agreement is null and void, denies breach of contract and pledges to honour any confidentiality obligation to Ryanair.

The case continues before Mr Justice Allen in the High Court on Wednesday.