Ryanair’s Laudamotion unit to close its Vienna base 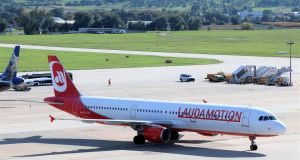 The Vienna base, the main hub for Laudamotion, will close on May 29th, Ryanair said Friday in a statement blaming the Vida union for the breakdown. Photograph: iStock

Ryanair’s Laudamotion unit will close its Airbus SE A320 base in Vienna, following through on a threat to cut more than 300 jobs after it failed to reach a deal with unions over cost reductions.

The Vienna base, the main hub for the carrier founded by the Formula One racing driver Niki Lauda, will close on May 29th, Ryanair said Friday in a statement blaming the Vida union for the breakdown.

Chief executive Michael O’Leary has been cutting costs to deal with the coronavirus crisis and said he needs to lay off staff and introduce pay cuts, while threatening to shut down Laudamotion if he can’t get costs down.

The carrier also hit out at the Austrian government for failing to step in while it worked on a bail-out package for competitor Deutsche Lufthansa, whose pilots in Austria are also represented by Vida. Ryanair, which acquired Lauda in 2018, had earlier threatened to close the base if a deal wasn’t reached.

Asked about Ryanair’s demand to link the wage talks to support for Lufthansa’s Austrian Airlines, Austrian finance minister Gernot Bluemel on Friday said collective bargaining should stay between companies and trade unions. He added that every eligible company can apply for Austria’s coronavirus aid.

Mr O’Leary has been a harsh critic of state-aid and has vowed to challenge the Lufthansa bailout.

The Ryanair boss has deferred capital investments, suspended share buybacks and cut management pay, with plans to eliminate 3,000 pilot, cabin crew and office jobs across the company. Remaining staff have been asked to take a 20 per cent salary cut.

Expenses at Lauda remained ahead of the rest of the group, and with Lufthansa’s Austrian arm set to receive some €800 million in support, the operation’s future was in doubt, the carrier said this month. - Bloomberg