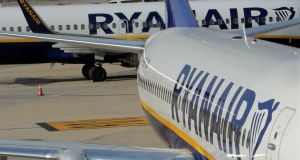 Pilots at Ryanair are campaigning for a new collective bargaining system to replace the employee representative councils that negotiate for staff. Photograph: Eric Gaillard/Reuters

Ryanair passengers could face considerable disruption over the Christmas period after a ballot of some of its pilots resulted in overwhelming support for industrial action.

Some 95 per cent of the senior pilots balloted by the Irish Airline Pilots Association (Ialpa) based in Shannon, Cork and Dublin voted in favour of industrial action.

However, it is not clear when this might take place. Under Irish law, after a ballot has been taken, notice of strike action must be given seven days in advance of the strike taking place.

Shares in the budget airline closed down by more than 4 per cent on the back of the news.

The executive of the Impact trade union, which is the overarching union of Ialpa, will meet on Tuesday to consider the result of the ballot. There were 84 ballot papers issued by Ialpa with 79 respondents indicating they were in favour of industrial action.

Responding to the news, a Ryanair spokeswoman said the company suspected this was “more PR activity by Aer Lingus pilots group IALPA, to distract from their failure in negotiating a paltry 3 per cent pay increase for Aer Lingus pilots”.

“Now that Ryanair’s Cork, Shannon and Belfast bases have agreed 20 per cent pay increases we expect the Dublin pilots to follow this trend. However, if Ryanair’s Dublin pilots are misled by some Aer Lingus pilots into industrial action then they will lose their favourable rosters and remuneration benefits that are specifically linked by agreement to dealing directly with Ryanair,” she said.

The airline noted that “less than 28 per cent of Ryanair’s Dublin pilots have voted in favour of unspecified industrial action”. The airline says it has more than 300 pilots in Dublin though it has not provided a precise figure.

“If any such industrial action occurs Ryanair will still not engage with, or recognise, Aer Lingus pilots or their Ialpa union.”

Pilots at the airline are campaigning for a new collective bargaining system to replace the employee representative councils that negotiate for staff at each Ryanair base.

However, Ryanair refuses to deal with the new organisation, the European Employee Representative Council, which wants to negotiate for its 4,000-plus pilots with the support of unions in countries where the company operates.

Reports last week stated that members of Italian pilots’ union, Anpac, in Ryanair were planning to stop work for four hours on December 15th. However, the airline said previous threats of stoppages in Italy had all been cancelled.

Eddie Wilson, Ryanair’s chief people officer, had warned that if pilots in Dublin supported any action, the company would withdraw benefits tied to its existing collective agreement. He added that the company could move aircraft from its Dublin base.

Ryanair was due to meet pilots on Monday night but it is understood the meeting was called prior to any threat of industrial action.