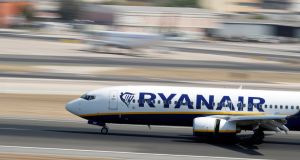 A report of an incident involving a Ryanair flight at Memmingen Airport, in Germany is at the centre of a legal row in defamation proceedings between the airline and one of its former pilots. Photograph: Rafael Marchante/Reuters

Ryanair has been ordered by the High Court to disclose a more detailed version of a report into an investigation into an incident involving one of its flights. The incident is at the centre of defamation proceedings the airline is taking against one of its former pilots.

Ryanair is suing Capt Erik Besancon, who was dismissed in August 2013, over postings he made on a website called the Professional Pilots Rumour Network. He used the pseudonym “Enjoy the View”.

The postings concerned an incident at Memmingen Airport, in Germany, in September 2012 as a Ryanair flight from Manchester was landing. It was investigated by the German Federal Bureau of Aircraft Investigation, which produced an interim report that Capt Besancon got hold of. He posted comments in December 2012 relating to the incident.

Ryanair sued claiming the words meant, among other things, that the airline operated unsafe internal procedures, that a culture existed within the company which pressurised crews to operate in a manner that comprises safety, and forced crews to operate under massive stress.

Capt Besancon denies the claims and also pleaded fair and reasonable publication on a matter of important public interest.

The pilot, in preparation for his defence, sought discovery of certain documents, including Ryanair’s own base investigation report into the incident. The airline released certain material but Capt Besancon complained the investigation report was too heavily redacted. Ryanair said it did so on the basis of maintaining confidentiality.

Capt Besancon asked the High Court to resolve the issue of discovery. Mr Justice Robert Barr, on Wednesday, said the Ryanair investigation report was almost completely redacted with the only portions left legible being headings over various items of information.

“It is fair to say that none of the content of the report was furnished,” he said. He ordered Ryanair to produce the report and said it could redact it by removing the names of people making statements or providing information and any other information identifying those individuals. Copies provided to the defendant’s solicitor must be returned at the conclusion of the case and may not otherwise be copied. There will be liberty to apply to the court if there is disagreement between the parties as to the extent of the redactions.

The judge refused to order discovery of another document called the “Operations Roadshow” which was generated for presentations to pilots at various locations following the Memmingen incident.