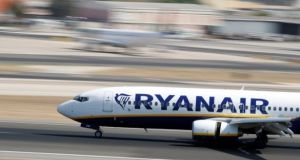 Ryanair’s closure of its Cork and Shannon airport bases for the winter threatens existing jobs along with efforts to ease the impact of Covid-19 and Brexit, employers and unions warned on Thursday.

Michael O’Leary, Ryanair Holdings chief executive, confirmed the airline would close its Cork and Shannon bases for the winter as EU countries, including the Republic, stepped up travel restrictions.

The move means that 135 Ryanair pilots and crew, 80 in Cork and 55 in Shannon, face being out of work until operations resume in April.

Niall MacCarthy, managing director of Cork Airport said the business was “devastated” at news of the loss of jobs and 13 routes that would result.

He pointed out that many of the airline’s flights from the airport had as few as 10 passengers.

“We have done everything in our power at Cork Airport to retain the base here and the connectivity that it delivers for the south of Ireland region,” Mr MacCarthy said.

Mary Considine, chief executive of Shannon Group agreed that the news was “disappointing” for both airline and airport workers.

She called for a clear road to recovery for aviation, which the pandemic has devastated over the last seven months.

Fórsa trade union official, Ian McDonnell, who represents the airline’s workers, said the organisation was disappointed that Ryanair did not contact it to allow time for talks before making the decision.

“The union’s mission since the pandemic struck the country in March has been to work closely with all aviation employers, including Ryanair, in order to maximise job protection,” he said.

“Fórsa has called on the Government to intervene to support the industry because Ireland’s connectivity through aviation is crucial to its economy.”

Fergal O’Brien, policy director with employers’ group, Ibec, warned that the loss of flights could hamper efforts by businesses in the south and west to recruit new EU customers to replace those lost or threatened by Brexit.

“We know that Brexit is going to hurt the regions more than the economy on average or the greater Dublin area,” he said.

“For companies that are looking to divsersify, when you are trying to get new customers, you have to have the face time.”

Mr O’Brien pointed out that air routes were vital to that and to existing business and tourism.

He also advocated that the Government re-examine its Budget 2021 pledge to provide €10 million to Cork and Shannon airports in light of Ryanair’s move.

Conor Healy, Cork Chamber chief executive, declared there was a real concern the city’s airport could close if the Government did not increase the aid announced in the budget.

He predicted that the withdrawal would have grave implications for the region as Cork Airport supported 12,000 jobs and generated €900 million.

Despite several calls for increased aid to aviation on Thursday, Minister for Finance Paschal Donohoe said there was nothing any government could do to compensate airlines for Covid-19’s impact.

Speaking on Newstalk Radio’s Pat Kenny show, Mr Donohoe said the Government was working to ensure the State actions were consistent with its EU partners and to ensure the economy was in a position to resume as early as possible.

Both airports will keep Ryanair winter services to Stansted. Flights from Cork to Katowice and Gdansk will also continue, as will services to Manchester and Wroclaw from Shannon. However, pilots and crews based outside the Republic will fly these routes.

Ryanair wants the Government to adopt the EU traffic light system, which classifies regions as green, orange or red, according to their infection risk.

This was intended to allow free travel between green and orange designated areas, but a Council of Minister’s meeting in Brussels this week stepped back from that in a move condemned by the aviation industry.

Instead, foreign ministers said that individual states could maintain their own restrictions on travellers from orange and red zones, excluding most of the bloc from free travel.

The Republic’s Government has agreed to adopt the system, but has yet to say how it will be applied here.