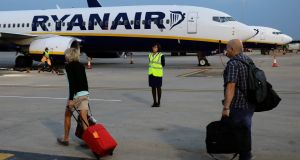 Ryanair’s chief executive, Michael O’Leary, said that Michael Hickey had made an enormous contribution to the airline during his time there. Photograph: Kevin Coombs/File Photo/Reuters

The Irish carrier has been in the spotlight for the past three weeks, since it announced the first of two rounds of flight cancellations affecting about 700,000 passengers.

The company confirmed on Friday that Mr Hickey is resigning following a near 30-year career with the airline, where he worked in various roles before becoming chief operations officer in 2014.

He will leave the airline in three weeks, after completing a number of projects on which he has been working and overseeing the handover of his responsibilities while the airline identifies and recruits a successor.

Mr Hickey is responsible for many of the day-to-day aspects of running the airline. Pilots, ground crew and other such areas fall under his control.

An issue with pilots’ rosters, stemming from large numbers of them taking leave in a period where the airline was preparing to phase in a new system for calculating their flight time, led to the cancellations announced in recent weeks.

Ryanair’s chief executive, Michael O’Leary, said Mr Hickey had made an enormous contribution to the airline during his time there, particularly to the quality and safety of its engineering and operations. “He will be a hard act to replace,” the chief executive said.

Mr O’Leary added that the airline was grateful that Mr Hickey was staying on in an advisory role to complete projects that include a multi-year engine maintenance contract and new hangars at Seville and Madrid airports.

“All of us in Ryanair wish to sincerely thank Mick for all his advice and guidance over the past 30 years and we wish him every possible success in the future,” Mr O’Leary said.

Three weeks ago, the airline announced it was cancelling an average of 50 flights a day until the end of October, affecting around 315,000 passengers.

It followed that on September 27th with news that it would fly 25 fewer aircraft through the winter months, resulting in further cancellations from November to March, which would affect about 400,000 customers.

Mr O’Leary apologised for the problems and said that he took full responsibility for the crisis and the rostering issues that lay behind it.

Ryanair has since said that more than 90 per cent of those affected by all cancellations have been reaccommodated or compensated.

Safety regulations limit pilots to flying 900 hours in a year. In 2016 Ryanair agreed with the Irish Aviation Authority to change the basis on which it calculated this to January 1st-December 31st. It had been using April 1st-March 31st, which is the airline’s financial year.