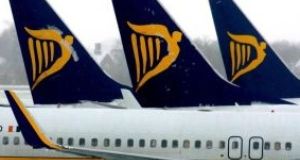 Ryanair has become the first airline to carry over 100 million international passengers in one year, according to new figures published on Thursday.

The airline said rolling annual traffic to December grew 17 per cent to 101.4 million.

Ryanair said passenger traffic rose 25 per cent last month versus the same month a year earlier. Overall, it carried 7.5 million customers in December 2015, compared to 6 million for December 2014. The airline attributed the rise in passenger numbers to lower fares following the terrorist events in Paris.

Load factor - a measure of how full aircraft are - rose 3 percentage points to 91 per cent as against 88 per cent for the same month a year earlier.

“Our traffic growth over the past two years has been remarkable, rising by 50 per cent over our December 2013 traffic figure of 5 million,” said Kenny Jacobs, Ryanair’s chief marketing officer.

The airline also announced it is to offer additional flights to London later this year from Dublin and Belfast, where it is opening a new base.

Ryanair said it is to increase its Dublin to Gatwick service to 7 times daily from March. It will also offer four daily flights to Gatwick from Belfast.

Belfast International Airport said it expects 750 new jobs to be created as a result of Ryanair’s decision to open a new base.

It said the airline will deliver in excess of 1 million seats through the three aircraft based at the airport.

“This is a most welcome announcement. The jobs and investment are considerable and amount to a valuable inward investment at low or no cost to the taxpayer, said the airpot’s managing director, Graham Keddie.

Separately, Aer Lingus said it will be adding 1,400 extra seats on flights from Dublin and Cork to Birmingham and Britol for the Cheltenham festival, which is a must-visit event for many Irish race goers.