High Court ruling on VW emissions case due next week 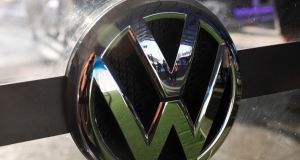 The proceedings first came before the District Court in May 2016. Photograph: Henry Romero/Reuters

A High Court judge is due to rule next week on proceedings by Volkswagen aimed at preventing a woman’s action arising from its emissions scandal continuing at Castlebar District Court. Ms Justice Una Ní Raifeartaigh is due to give judgment on Tuesday, December 5th.

Eithne Higgins, a nurse, of Boyle, Co Roscommon, claims a 2010 Seat Leon purchased second-hand by her from a garage in Ballyhaunis, Co Mayo, is among the estimated 11 million cars worldwide affected by the emissions problem.

Ms Higgins is claiming loss and damage in sums to be ascertained, including for any amounts that may be due for motor tax.

Volkswagen says it is not seeking to stop Ms Higgins litigating but maintains that Dublin District Court is the appropriate venue for hers and other cases initiated here against it arising from installation of so-called cheat devices designed to mislead US emissions tests.

The proceedings first came before the District Court in May 2016 and lawyers for Volkswagen walked out of the District Court on September 6th after saying the firm’s legal advice was the court had no jurisdiction to proceed as the district judge proposed.

The District Court proceedings remain on hold pending the outcome of the High Court case.