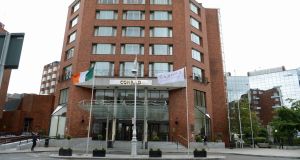 The Conrad Hilton has been named as Ireland’s leading suite hotel at the World Travel Awards. Conrad won two of the 19 awards won by Hilton properties worldwide. Martin Mangan, GM of the Conrad Dublin, said: “It is an honour to have been recognised.”

ETIAS to ease travel to EU

The World Travel Tourism Council (WTTC) has congratulated the EU on the adoption of the new European Travel Information and Authorisation System (ETIAS). When ETIAS comes into operation, all visa-exempt third-country nationals who plan to travel to the Schengen area will have to apply for pre-travel authorisation. The aim of this is to ease travel to the EU and simplify border checks. During negotiations, WTTC stressed the importance of the process to be made as easy as possible for legitimate travellers. In addition to the ease of process, WTTC also advocated for the fees to remain at a reasonable level, one that did not discourage travellers from coming to Europe. The final fee of €7 meets this balance.

Tourists in Paris are frequently told to stay on their guard against various scams on the streets of the city – pickpockets, bag snatchers and people with fake petitions abound across the City of Light.

Now, Paris police officers are also warning tourists that thieves are targeting travellers not just in the streets, but also behind the closed doors of their hotel rooms. Gangs of thieves, dubbed “hotel rats” by French authorities, slip into hotels and blend in with guests to steal their belongings.

“Some of them join a group of tourists and leave with their luggage. Then there are those who reserve rooms under a fake name and go around rooms looking for safes,” Tony Mariet, an inspector with the Paris police, told Le Parisien. “We are dealing with international professional criminals.”

The hotel thieves mainly target the popular hotel district in Paris’s 8th arrondissement, nicknamed the Golden Triangle. But any hotel in the city can be a target.

Paris hotel receptionists are extremely familiar with the groups of so-called “hotel rats”, and they say it is nearly impossible to combat them. “This happens every day,” one receptionist told Le Parisien.

Earlier this summer, Paris announced it would be deploying 5,000 extra police officers in the streets of Paris to help protect tourists from various scams. Officials say the police team dedicated to hotel thefts in Paris questions about one gang of “hotel rats” each month.

On October 29th, Turkey plans to open Istanbul New Airport, also known as Istanbul Grand Airport, unlocking the potential for significant capacity growth to and through the Turkish metropolis. It will be three times the size of Istanbul’s current main airport, Ataturk, which is limited to 70 million passengers each year. The new airport’s five runways will be able to handle 200 million passengers once expansions are complete.