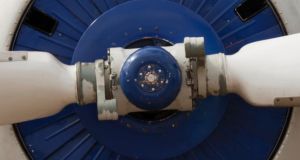 The Chinese company behind the potential acquisition of an Irish aircraft leasing firm has moved to deny reports the deal has been valued at €12 billion.

Dublin-based Avolon is in ongoing talks with a subsidiary of China’s Avic Capital, the country’s largest aerospace company.

Papers have been filed with the US Securities Exchange Commission (SEC) ahead of the anticipated sale, but Avolon was unable to comment on negotiations, a spokesman said.

Avic said it was negotiating with “relevant parties” and had begun reviewing Avolon’s finances.

“The company has not reached a binding agreement or offer with relevant parties regarding the acquisition of Avolon and cannot guarantee the completion of the deal,” it said, adding there were “bigger inaccuracies” in the previous report on the deal, without being more specific.

Avic said in a separate statement it was halting trading of its Shanghai shares for five days from yesterday.

Avolon was launched in May, 2010, and is now one of the world’s leading aircraft- leasing firms, with a focus on acquiring, managing and selling commercial aircraft.

China Business News reported earlier this month that Avic and CIC were jointly seeking to acquire Avolon for €12 billion.

Reuters news agency reported the two companies were in talks to buy it for $4 billion to $5 billion, including debt.

Avic said last September it was interested in buying overseas lessors as it expands its fleet to meet rising domestic travel demand.

Its portfolio of 202 aircraft is now worth $4,388 million in aggregate net book value.

1 In this strangest of recessions, what happens next for Ireland?
2 Bank of Ireland sees about 2,000 staff apply for voluntary redundancy
3 Michael O’Leary is the boss you want to lead an airline out of crisis
4 Ireland’s Covid-19 economy in five graphs
5 Minister seeks AG’s advice on banker accountability laws
6 EY Entrepreneur of the Year: nominee profiles
7 Should I switch bank now with Ulster Bank at risk of closing?
8 Ireland is in danger of losing the woods for the trees on emissions reduction
9 Estée Lauder staff at Dublin airport plan further strike action
10 Fortnite owner signs multimillion deal to buy Irish ‘kidtech’ firm
Real news has value SUBSCRIBE