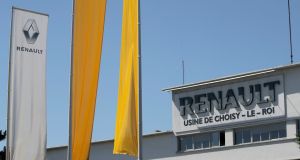 Renault finalised on Wednesday a €5 billion loan from the French government, strengthening the car-maker’s finances in the wake of the coronavirus pandemic which has ravaged the auto industry.

Renault said the credit facility carried a guarantee from the French state – which owns a 15 per cent stake in Renault – of up to 90 per cent of the total amount borrowed.

Renault also said in a statement that the loan would help finance the company’s liquidity requirements.

The car-maker announced last week plans to cut 15,000 jobs worldwide, including 4,600 in France, where the company will seek voluntary departures and use retirement schemes.

The announcement sparked weekend protests at some factories, including at Maubeuge in northern France, although Renault’s chairman Jean-Dominique Senard has pledged the site will not be closed. – Reuters

1 My aunt never told us that Gran passed away with no will
2 Ryanair to slash 1,000 flights from August and September schedules
3 Green Party TD queries ‘usefulness’ of another appeal in €13bn Apple tax case
4 The $6bn judgment pitting Nigeria against Irish businessmen
5 Government to push through €2bn credit guarantee scheme next week
6 If it’s safe to do so, could this be the time to spend for Ireland?
7 Majority of employees don’t want to return to pre-Covid working patterns
8 Burger King to sell whoppers from cows that belch out less methane
9 Owners of Cork shopping centre sue for €30m after car causes fire
10 Costs and borrowing rules locking a generation out of home ownership, builder warns
Real news has value SUBSCRIBE