Q&A: Why are people flocking to the UK to pick up used cars? 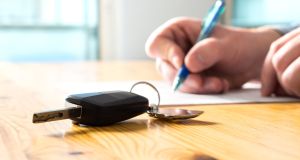 Simi estimates that the average tax take on a new car is €10,000; on these secondhand car imports, it is about half that. Photograph: iStock

A study from UCD’s Michael Smurfit Graduate Business School and the Marketing Institute of Ireland suggested that used secondhand car imports will outpace new sales in Ireland by the end of this year.

For consumers, this isn’t necessarily a bad thing as cheaper cars can be obtained abroad. But for the Government and the car trade there’s reason to be concerned.

So, why is it happening?

Added to that is the sheer volume of choice available in the UK’s car market. A total of 2.37 million cars were registered in the UK last year, compared to a meagre 220,000 in the Irish market. As with any sector in which there’s an abundance of choice, prices tend to be lower.

What sort of savings can be expected?

There’s been no shortage of people waxing lyrical about the advantages of taking the train up North or ferrying across to Britain to pick up a used car and the pages of this newspaper have been no exception. One writer who picked up a four-year-old Volkswagen Golf in Enniskillen saved about €2,000 after vehicle registration tax was paid. Another bought a 2018 BMW 5 series and saved about €6,500. The basic rule of thumb appears to be that the more you spend, the more you save.

Is their any climate impact from imported vehicles?

Yes and no. Because they’re generally secondhand vehicles, imports will be older and therefore less friendly to the environment. But they’re not less friendly simply by virtue of them being imported. BMW, Volkswagen, Skoda and Renault distribute mostly the same cars here as they do in the UK. But that age lag does mean that the average CO2 is about 10g higher on an import. According to Brian Cooke, the designate director general of the Society of the Irish Motor Industry (Simi), CO2 from cars more than four years old is “materially higher” than on new cars.

Does the taxman lose out with imports?

Similar to the above, the answer to this isn’t straightforward. A study from UCD issued on Monday suggested that the effective rate of tax on a new car and an import are effectively the same. However, people have a tendency to import cheaper cars, with secondhand imports usually about 50 per cent less expensive. As a result, the corollary is that less tax is paid. Simi estimates that the average tax take on a new car is €10,000; on these secondhand car imports, it is about half that. However, they admit it is difficult to give a firm estimate on that.

Is the car trade worried?

In a big way. If sterling continues to remain weak against the euro, imported cars could outweigh new car sales. Indeed, that’s what UCD’s study suggests will happen this year. If we think back to the years following the crash, 200 car-related companies ceased trading, resulting in 10,000 job losses. This level of devastation appears unlikely, given that dealers are also importing second hand cars for resale in Ireland. Nevertheless, their margins are being squeezed and their focus is shifting to servicing. So while their concern is well-founded, there’s unlikely to be a resolution until the UK leaves the EU.