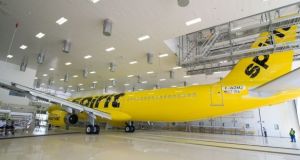 Dutch investors have plunged for a majority stake in Irish aircraft painter, Maas Aviation, in a deal that will see founder and majority shareholder Darragh Hall leave the company.

Irish-headquartered Maas Aviation Group paints aircraft at four facilities in Germany, the Netherlands and Mobile, Alabama, in the US. European commercial jet maker Airbus is a key customer.

Amsterdam-based investment firm Egeria said on Thursday that it had bought a majority stake in Maas. The Dutch company normally backs businesses worth €50 million-€350 million.

Most of the current management, including chief executive Tim Macdougald, are staying with Maas and will continue to own a minority stake in the group.

However, Darragh Hall, who owns 76 per cent of the group through its ultimate holding company, Devonton, is leaving.

It was not clear yesterday if Egeria was buying Mr Hall’s shares as the Dutch player refused to comment beyond its statement. There was no one available to speak at Maas.

The firm was founded in Shannon 37 years ago as Expressair Aviation. Its early backers included the late Tony Ryan’s aircraft-leasing business GPA.

The business, based in Donabate, Co Dublin, has forged a partnership with Airbus, one of commercial flying’s two dominant manufacturers. It invested €15 million in expanding its facilities two years ago.

Its hangars in Hamburg and Mobile paint craft off the assembly line for Airbus. Paint shops at Maastricht Airport and Woensdrecht in the Netherlands repaint aircraft as required by airlines.

Aircraft are painted for protection and against corrosion and must be repainted at intervals throughout their lives. The livery is also changed when moving from one airline to another, or when a carrier decides to rebrand.

In a statement Mr Macdougald described Egeria’s move as a “positive step for the company”. He added that it provided the backing to support existing operations and future growth. He thanked Mr Hall for his contribution to the company.