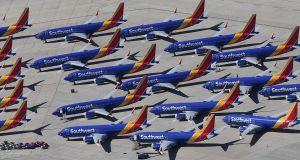 Once regulators approve Boeing’s grounded 737 Max jets for flight, each aircraft will likely require between 100 and 150 hours of preparation before flying, officials from the three US airlines that operate the Max have said.

The estimate, provided by American Airlines Group, United Airlines and Southwest Airlines officials, is the first indication of the time needed to bring the jets out of storage following a worldwide grounding in March spurred by deadly crashes in Indonesia and Ethiopia.

The preparations were discussed at a meeting between Boeing and its Max customers in Miami earlier this week, and include a list of items ranging from fluid changes and engine checks to uploading new 737 Max software. The estimated timeframe does not include pilot training, they said.

Southwest is the world’s largest Max operator with 34 jets, followed in the US by American Airlines with 24 and United with 14. All three have dozens more on order, meant to service booming air travel demand.

Boeing did not comment on the airlines’ estimate of the time needed to prepare the Max aircraft for flight, but spokesman Paul Bergman said the company’s maintenance and engineering teams have been working with customers to determine how to efficiently stage work once regulators approve the fleet’s return to service.

The process has included work with Boeing’s supply chain to ensure key parts “are available for current maintenance tasks and the fleet’s transition from storage and preservation activities to operational flight,” he said.

Airline officials stressed that jets would only be removed from storage once regulators approve Boeing’s software update, meant to fix a system called MCAS that played a role in both crashes, which together killed 346 people.

US Federal Aviation Administration boss Dan Elwell said on Wednesday there is no timetable to approve the plane for flight.

Boeing has yet to formally submit the fix to the FAA.

Officials said it usually takes 80 hours to put one jet into storage. For removal, the process is reversed and requires additional maintenance work and testing. For the Max, it will also include uploading and testing the software fix.

The allotted 100-150 hours of jet preparation comes on top of the hours needed for pilot training. Regulators are still debating whether pilots should test the crash scenarios in a simulator, which would cost airlines more time and money than Boeing’s proposed computer-based training.

Boeing has said that simulator training is not necessary for the 737 Max, and is recommending a mandatory computer-based audio course that explains MCAS and could be completed at a pilot’s home in about an hour, according to pilot unions.

The aircraft manufacturer has also offered supplemental training that includes a video on emergency checklists, though some regulators and pilots are pushing for either immediate or continuing simulator training.

Ultimately each airline will be responsible for developing its own training regime based on its different needs.