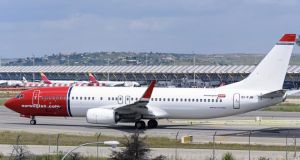 Mr DeFazio recently wrote to European Union transport commissioner Violeta Bulc claiming that Norwegian’s labour practices were unacceptable and would be illegal in the US were the airline based there.

Official figures show the congressman’s biggest campaign donor is a political action committee tied to the Air Line Pilots’ Assocation, a powerful trade union that is a vocal opponent of Norwegian’s efforts to get permission to fly to the US.

According to the data, compiled by watchdog Opensecrets from the Federal Election Commission, the pilots’-linked committee donated $140,000 to Mr DeFazio’s election campaigns between 1989 and 2016.

Committees linked with a number of other organisations opposed to Norwegian’s plans have given smaller sums to help get Mr DeFazio elected. They included Delta Airlines, the Southwest Airlines Pilots’ Association and the Association of Professional Flight Attendants.

The committees are separate from the organisations themselves, but comprise their members or workers. They contribute directly to the election campaigns of those those running for office in the US .

The airline recently paid advisors Prime Policy Group $180,00 and John Byerley $40,000 to lobby the US government on its behalf.

Norwegian Air Shuttle based and licensed its subsidiary airline in the Republic so that it could benefit from the EU-US Air Transport Agreement, which gives European airlines open access to the US.

The group wants to use Norwegian Air International to offer cheap flights between Europe and North America and the Far East, including services linking Cork and Shannon with Boston and New York.

However, in the face of pressure from unions and rivals, Washington’s department of transportation has delayed for two years in granting Norwegian a foreign carrier’s permit, preventing it from flying to the US.

The delay has angered the EU, which claims the US is in breach of the treay and wants the issue to go to arbitration. Ms Bulc warned Washington’s transport secretary Anthony Foxx that the row could damage transatlantic relations.

Opponents including the pilots’ association, Delta and Norwegian’s rival SAS, claim the group is using the Republic as a flag of convenience to avoid labour protections and hire crew through Asian subcontractors. Mr DeFazio repeated those claims in his letter to Ms Bulc, describing the practices as a slippery slope for the aviation industry.

The airline has repeatedly dismissed this. “The fact remains that Norwegian Air International is an approved and fully operational EU carrier that meets all requirements under the EU-US Open Skies Agreement,” a spokesman said this week.