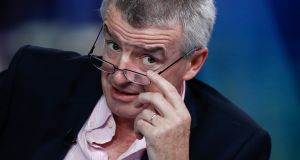 Michael O’Leary: I was the one who was slow to move. Photographer: Simon Dawson/Bloomberg

Ryanair boss Michael O’Leary admits he was last to get on board with the company’s new policy of being nice to customers and had no idea “just how stressful” it was to fly with the airline.

The carrier adopted a more customer-friendly approach in late 2013 amid a tsunami of complaints about its punitive charges and inflexible baggage policies.

Mr O’Leary said the charm offensive had been driven by staff, not by management, who had become obsessed with driving down costs.

“I was the one who was slow to move. We were the ones telling staff - you will measure everybody’s bag down to the last millimetre,” he told the annual Carmichael lecture in the Royal College of Surgeons in Dublin.

He said the airline’s strict baggage policy was not designed to make money but to reduce the number of passengers checking in bags, which he noted had fallen from 80 to 20 per cent.

This, he said, had transformed the company’s cost base, as it no longer needed to rent the same number of check-in desks or deploy staff to man them.

“But we over did it. We had people inventing new rules at boarding gates… and we were putting our staff at points of conflict with customers,” he said.

“I didn’t quite get just how stressful it could be to board a Ryanair aircraft,” Mr O’Leary said.

The outspoken airline chief said Ryanair’s success was down to its swift turnaround times - 25 minutes compared to Aer Lingus’s one hour. This allowed the company’s aircraft make, on average, two more flights a day than most of its rivals.

However, the model wasn’t transferrable to the long-haul market, he said, as the flight times were too long hence the company had no plans to begin flying to the US.

In his address, Mr O’Leary predicted a radical shift in the airline industry within the next five years.

“The three big legacy carriers in Europe – BA, Lufthansa and Air France are partnered up with three big US majors - and are fighting the three big Gulf carriers, trying to keep them out.”

However, he said these airlines were likely to consolidate into three global superpowers, each comprising a Gulf , a European and a US carrier.

“They will have enormous countrol and almost limitless pockets to fund better aircraft, better services and lower prices in the economy cabin on long haul.”

This would not damage Ryanair’s dominance of the short-haul market in Europe, he said, noting the company had orderd an additional 400 aircraft and planned to grow annual passenger numbers from 105 million to 180 million in the next five to six years.

Mr O’Leary said his ultimate ambition was to drive the cost of tickets down to zero, with the company funding itself through discretionary sales of snacks, wifi or even in-flight gambling.

Asked if the Health Service Executive needed a “Michael O’Leary” to sort its problems, he said: “Yeah, it does”.

“Nothing will succeed in this country if it is run by politicians,” he said, noting the health service was beset by an ineffective management that were bypassed by unions who were effectively running the show.