Norwegian Airlines has flown 250,000 people from Dublin to US 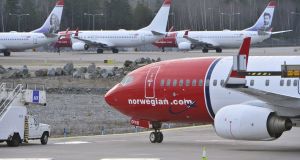 Norwegian Air has flown 250,000 people from Dublin to New York state and Rhode Island since it launched its services 14 months ago.

The news comes following a war of words over the airline’s decision to axe flights between Belfast International Airport and the same destinations earlier this week.

The airline began flying the routes in July 2017. It said the numbers made it one of Dublin Airport’s “leading transatlantic carriers”.

Norwegian announced the milestone a day after a prolonged row over its decision to cut its twice weekly Belfast services following a “review of customer demand”.

Belfast International accused the airline of “moronically” channelling customers from the region to Dublin, from where Norwegian flew twice daily to the US.

The airport said it was “unsustainable” that two million people in its catchment should be forced to journey to Dublin to fly across the Atlantic.

However, several people responded online that Dublin was easily accessible from the North and that the Dublin Airport’s facilities, including US customs pre-clearance, made the longer journey worthwhile.

A number criticised delays and security queues at Belfast International and urged the airport to compete with its larger rival.

Hamilton has a number of connections to other destinations in the North American country and is close to Toronto and Niagara Falls.

It will end its Belfast services on October 26th. It advised customers from the North that it served Stewart and Providence airports from Dublin, Cork and Shannon.

Norwegian has already announced it is cutting its Cork-Providence service back to summer only from all year round. That move also followed a review of customer demand.

The carrier said at the weekend that it was cutting its Edinburgh-US service, blaming Britain’s high passenger taxes, which Norwegian said were £75 sterling per head.