At Ryanair’s agm, the chief executive was not confident of a deal being agreed by March 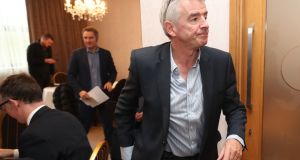 UK prime minister Theresa May struck a discordant note yesterday after her efforts at the EU summit in Salzburg – Mozart’s birthplace – failed to win support for her Chequers plan, which details how she intends the UK will leave the EU while ensuring there is no hard border in Ireland.

Her call on the EU to come up with an alternative seems likely to push the UK closer to a so-called “hard” Brexit – that is, departing the EU without a deal. The pound slumped shortly afterwards, indicating the possible economic consequences of such a move.

It cannot have been music to the ears of many industries, but aviation in particular will be concerned. At Ryanair’s annual general meeting this week, chief executive Michael O’Leary warned that flights could be grounded for a period as a result if the UK crashes out of the EU with no deal next March.

He predicted that this could happen for a day or days at the most until the politicians realised that it would not be possible for Britain to function with no flights on or off the island.

That is a nightmare scenario, but given that no one believed UK voters would opt to leave in the first place, anything seems possible. O’Leary was not confident of any sort of a deal being done by March. In fact, he suggested it could possibly end up with Brexit by omission, that is, an election or some other such event derailing everything.

One other scenario he believed likely was a transition period that allowed everyone to kick this particularly awkward can down the road for a year or two. At that point, he said, the politicians would most likely “down tools” and the issue would be dropped until months before the new deadline, at which point, people would panic and the whole sorry process would begin all over again.