Northern Ireland to lose its only direct flight to the US 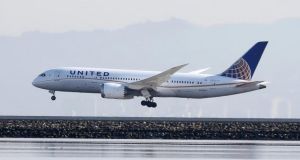 Business leaders in Belfast say United’s decision is a blow for the North and could not have come at a worse time.

Northern Ireland is set to lose its only direct, scheduled transatlantic air service following a decision by United Airlines to ground their Belfast to Newark route from next January.

United Airlines said it was axing the service from Belfast International Airport because of its “poor financial performance”.

Earlier this year the Northern Ireland Executive had promised United a multi-million pound financial support package, estimated to be worth more than £9 million, to keep operating the service after the airline had warned that the route was unprofitable.

The European Commission had launched an investigation into the funding package because under EU state rules public authorities are not allowed to grant a specific airline an “undue advantage”.

A spokesperson said: “ The arrangement was put in place without prior notification to the commission under EU State aid rules. The commission received a complaint alleging that the measure was in breach of EU rules and looked into the matter.

Because United has decided to discontinue the service the commission has said it will now close its investigation.

But the North’s economy minister Simon Hamilton believes the executive had done the “right thing” to try and save what he said was a key route.

“Faced with the same circumstances again, I would make the same decisions. All public money has been recouped with interest and we retained the route for a longer period,” Mr Hamilton said.

The Minister said the executive had always been aware that there could be a potential issue around state aid compliance but having been issued with an ultimatum during the summer from United that it would withdraw the route without “additional support” local political leaders had done all they could to try and save it.

Mr Hamilton admitted that the loss of the North’s only direct flight to the USA was a setback and said he was determined to establish a new Air Routes Task Force that would help attract more airlines and secure additional flights.

Blow for the North

Local business leaders say United’s decision is a blow for the North and could not have come at a worse time.

Roger Pollen from the Federation of Small Businesses (FSB) said:”The direct air route between New York and Belfast has been highly valued, not only because it enabled many investors and visitors to fly directly into Northern Ireland, but because of the signal it sent about our role in the international economy.

“United Airline’s decision will leave visitors and investors with no other option but to travel via the Republic of Ireland, which will heighten the need for clarity on how the border will operate following the UK’s departure from the EU.”

Earlier this year, Dublin Airport revealed that a record 1.2 million Northern Ireland residents had used the airport last year - a 37 per cent year on year increase.

The airport said that New York’s JFK was one of the most popular destinations for passengers travelling from Northern Ireland.

Management at Belfast International Airport (BIA) are adamant that the European Commission are responsible for “killing off” the Belfast to New York service and have said it is an example of “abysmal Brussels decision-making.”

Graham Keddie, managing director of BIA said: “”We have worked tirelessly to safeguard the service, but Brussels took a different view, believing the support package gave United an unfair advantage over services from elsewhere.

“This is a vital link for business and losing it will be a body blow to Executive ministers who use it to promote Northern Ireland to would-be investors from the United States.

“This is a bad day for the executive and a bad day for Northern Ireland, which is still finding its feet after a generation lost to conflict. The United service was well supported and only recently carried its one millionth passenger”.