Supreme court ruling could have ramifications for millions in gig economy 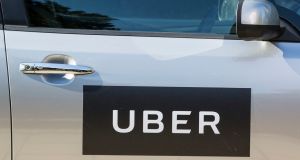 Uber operating companies have appealed to the Supreme Court after losing three rounds of a fight with drivers. Photograph: Laura Dale/PA Wire

Uber was defending its business model on Tuesday at Britain’s Supreme Court in a battle over rights in the workplace that could have ramifications for millions of Britons earning a living in the gig economy.

In a case brought by two drivers, a London employment tribunal ruled in 2016 that they were entitled to workers’ rights such as the minimum wage, paid holidays and rest breaks.

As things stand, Uber drivers are treated as self-employed, meaning they are legally entitled only to minimal protections.

Whilst the drivers point to a contractual relationship with the firm, Uber says there is a looser set-up.

“Drivers were under no obligation to use the app at any time, or to accept trips offered to them; Uber did not pay them for any services and the drivers incurred all necessary expenses,” the company said in a legal document.

The Silicon Valley-based firm has lost two appeals in the case, prompting it to seek a hearing at the Supreme Court which is considering the matter on Tuesday and Wednesday.

A judgment is not expected until at least October. If Uber loses, the firm is highly unlikely to be able to appeal and a further tribunal hearing may be needed to decide how the ruling is applied in practice.

Other firms in the gig economy use a similar business model, where people work for one or more companies without fixed contracts.

Uber faces similar cases elsewhere with Canada’s top court in June finding in favour of a driver in a case that paves the way for a class action suit calling for the company to recognise drivers there as employees.

Separately, in London, the company is trying to win back its licence after the city’s transport regulator stripped it of its right to operate in November for the second time in just over two years. Its appeal will be heard in September. – Reuters

1 MSD buys Takeda biologics plant in Dunboyne
2 State’s biggest landlord records 30% rise in rental income
3 ‘Saudi Arabia is where the opportunities will happen in future’
4 Facebook agrees Irish wind-farm deal with Brookfield in Tipperary
5 Trump’s TikTok move may have far-reaching consequences
6 Wirecard was looted before collapse, German prosecutors suspect
7 Homebuilders cite lessons from ‘scary’ crash as they plot future
8 Data centres will force State to choose between climate and investment
9 Project Eagle: What was it and why is it in the news?
10 ‘Pandemic-proofed’ D2 office investment seeking €1.95m
Real news has value SUBSCRIBE