New car sales plummet 72% in May despite dealers reopening 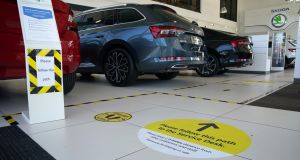 Some 1,752 new cars were registered in the month, compared to 6,320 in May last year. Photograph: Christopher Furlong/Getty Images

New car sales plummeted by 72 per cent in May compared to the same month last as retailers’ showrooms remained closed until the middle of last month.

Some 1,752 new cars were registered in the month, compared to 6,320 in May last year, with sales so far this year down 34.6 per cent, according to data from the Society of the Irish Motor Industry (Simi).

A major hit to the new car market is the collapse in the car rental market since the coronavirus crisis began. Last month just nine new cars were registered as hire drives, compared to 1,537 in May of last year. Hire-drive registrations traditionally account for 16 per cent of the new car market, but so far this year just 2,730 new cars have been sold to rental companies, down from 14,000 by this time last year.

Used-car imports for the month fell more, down 90.8 per cent in May with just 857 imported cars registered in the month. So far this year, used-car imports are down by 59 per cent.

“With new car sales for the month over 70 per cent down on May last year and with both the dire economic outlook for the rest of the year and no hire-drive activity, it is clearly going to be a very challenging period for the industry,” said Brian Cooke, Simi’s director general.

“The key July registration period is fast approaching, and the motor industry has commenced promotional activity with a variety of attractive new car offers already announced in order to optimise sales,” he said, adding that “strong Government support in the coming weeks, months and year will be vital in helping the industry support the nearly 50,000 people in employment”.

Sales of diesel cars, which had been declining prior to the crisis, have fallen by 39 per cent this year with 22,877 cars sold. However, the category still accounted for the largest share of the new car market, with 44.08 per cent.

So far this year there has been growth in sales of petrol plug-in hybrid vehicles with 1,135 cars sold, a 41 per cent increase on the same period last year.

Premium brands Porsche and Tesla are the only companies to have seen growth in the year to date compared to the same five months last year. Tesla has sold 416 vehicles so far this year, up from 36 in the same period last year, while Porsche has seen growth of 48 per cent, representing a total of 55 vehicles registered so far this year.

Meanwhile, the best-selling model remains the Toyota Corolla, with 2,478 registrations, ahead of the Hyundai Tucson with 1,969, and the Volkswagen Tiguan with 1,757.