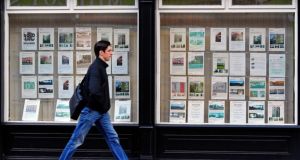 State assets agency Nama should be prepared to fund housebuilding in Dublin and its commuter belt to avoid a bubble developing in residential property prices in the region, an economist said yesterday.

Dermot O’Leary, chief economist with stockbroking firm, Goodbody, warned that there was little scope to meet the likely demand for housing in the greater Dublin area, and new building should start there “immediately”.

In a report Irish Property - Foundations of Recovery, published yesterday, Mr O’Leary points out that vacancy rates in the capital and the mid-east region, Dublin and its commuter-belt in surrounding counties, are low at 5 per cent and 7 per cent.

The report states that, while demand forecasts suggest there is a need for housebuilding in greater Dublin from this point onwards, there are concerns that the construction industry will not be able to meet those needs.

Publishing the report yesterday, Mr O’Leary said the solution would be to finance major residential construction projects in the capital and its hinterland, and argued that Nama would have to play a key role in this.

“If we are to avoid bubble-type price rises on an annual basis in the Dublin area, then we need to fund construction projects and Nama is the obvious agency to do this,” Mr O’leary said.

He added that the agency will have to find viable projects that it believes will generate a return for the taxpayer and fund them.

“But it needs a political push,” Mr O’Leary added.

The economist was speaking at the same time a top civil servant was telling a Construction Industry Federation (CIF) conference that cash generated from the sale of State assets could be used to fund some building projects.

Robert Watt, secretary general of the Department of Public Expenditure and Reform, said there were hopes that the upcoming budget could include some provision for increased capital spending.