Pobeda will initially fly four times a week to Ireland, according to Russian regulator’s website 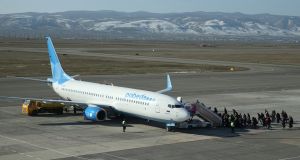 A Pobeda Airlines plane at Uytash Airport in Makhachkala, the capital city of Russia’s Republic of Dagestan, earlier this year. Photograph: Alexander Ryumin\Tass via Getty Images

The Kremlin’s aviation regulator, Rosaviatsia, has issued a decree granting permission for Aeroflot’s low-cost subsidiary to start flying a new direct service from Moscow to Dublin.

Pobeda, Aeroflot’s budget airline, will initially fly four times a week from the Russian capital to Dublin, according to filings published yesterday on the regulator’s website. In March, The Irish Times reported that Dublin Airport had met with senior Aeroflot management in Moscow and had agreed on a deal to commence a regular service.

Government agencies in Ireland have been lobbying hard in recent years to secure a direct flight to Moscow and are hoping it will boost tourism and trade with Russia, which was badly hit by sanctions over the Kremlin’s interference in the Ukraine conflict. Industry sources indicated that Pobeda may start its service in spring next year.

The airline, which carried 4.6 million passengers in 2017, became more widely known internationally during the recent World Cup as football fans used its service to transit between host cities.

Pobeda’s previous incarnation, Dobrolet, was grounded in August 2014 after Irish-based SMBC Aviation Capital cancelled leasing agreements with the airline in accordance with European Union sanctions related to Russia’s annexation of Crimea. The EU justified the sanctions against Dobrolet as the airline only flew from Moscow to the disputed Crimea peninsula. Pobeda, which was founded in September 2014, does not currently fly to Crimea.

Apart from Valletta in Malta, Dublin is the only capital in the European Union not served by a regular direct flight from Moscow.

Aeroflot previously used Shannon as stopover to the US and the hope in Government circles is that an Irish airport can once again become a Russian aviation hub. In 1978, Aer Rianta approached Aeroflot with a proposal to store Soviet Aviation Fuel at Shannon for use on the Soviet airline’s transatlantic services.

By the early 1980s, more than a thousand Aeroflot flights a year were clocked through Shannon as the Russian carrier routed other transit flights via Ireland. Aer Rianta’s co-operation with Aeroflot led to the opening of a string of duty-free shops in airports in Moscow and St Petersburg.

The refuelling at Shannon ended after Aeroflot acquired longer-range aircraft, while the 1998 rouble crash and default by the Russian government forced most of the Irish community to abandon Moscow.

S7, the privately-owned Russian airline, started flights to Dublin in 2008 but scaled back after the economic crisis. The carrier only schedules weekly flights now during summer months. Ryanair was granted permission in 2013 to fly by the Russian watchdog but never exercised their rights.