Can the traditional car dealership survive?

Will the current ‘plate-glass’ model be superseded by shopping centre outlets? 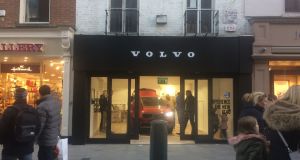 Most recently, Volvo launched the new XC40 with a “pop-up” shop on Dublin’s busy Grafton Street .

Abernathy’s Ford in Co Cork used to be set into an old coaching house and you could see the showroom through two gorgeous, arched windows.

Abernathy’s is still very much in business, but sadly (sadly for aesthetic reasons) it’s since moved to a big plate-glass premises in nearby Midelton. I’m sure it was the right decision for space, for customer parking, and service facilities and so on, but I miss that elegant old building.

The question, now, is how sustainable is the big plate-glass model for car dealers? Can a business model, which requires a massive injection of cash at the building stage (in the region of €6 million for a large premises), followed by regular subsequent investments as carmakers chop and change their minds about how the brand should be presented to customers, still be justified in an era when car sales are moving increasingly online?

There has been an interesting move towards dealers setting up shop in shopping centres and even on city-centre streets. Most recently, Volvo launched the new XC40 with a “pop-up” shop on Dublin’s busy Grafton Street – that a new car was being sold to the public on a pedestrianised city street says something about the direction in which car retailing may be heading.

Volvo will go further later this year, when it launches Care By Volvo in Ireland. It is a subscription-based service. You won’t actually buy your car, but will instead lease it long term, paying a fixed monthly fee to cover everything bar the petrol. And what of insurance, tax and servicing? The lot will be paid for up front. It seems to be tailor made for switching to an online sales model, but Volvo Ireland has assured us that its dealer network remains a vital part of the business. The nominal monthly fee for Care By Volvo is about €600 to €700, but it’ll be interesting to see how Volvo Ireland manages to package the inflated cost of insurance into the cost here. It may be a significant tripping point.

There’s no doubt that online research has become a significant factor in buying a car. Dealers are reporting that, whereas people used to come into their premises to learn about a new car for the first time, now they are coming in armed with knowledge, detail, and even knowing precisely which options they want.

That being the case, surely it would make sense for dealers to start abandoning the big out-of-town dealer model entirely. And perhaps move towards having shopping centre premises where one or two models can be displayed, where staff can be more about showing off the brand and taking orders than giving the hard sell and where an awful lot less square footage needs to be paid for?

Hyundai has been something of a pioneer in this regard, with the Rockar dealership in the vast BlueWater shopping centre in Kent in the UK. Rockar founder Simon Dixon told attendees at a retail design conference that “conventional car showrooms are getting bigger and bigger, while the number of people visiting them is getting smaller and smaller. As a customer you might be the only person in that huge environment. It’s intimidating.”

Dixon’s plan seems to be working, up to a point. In general, Rockar sells about the same amount of cars as a traditional dealer, but it gets a far higher number of visitors which is good for brand-building if nothing else.

The shopping centre model is still relatively unbroken ground in Ireland, but one who has tried it is Paul Linders. His eponymous Renault dealership dipped its toe in the shopping centre market, with an outlet in Swords Pavilions. His experiences suggest that there’s at least a little way to go before these smaller, lower-overhead dealerships supplant the more traditional offerings.

“We were open in Pavilions for four months and sold 52 cars in that time” said Linders. “People liked that they weren’t sales people but brand people – whether or not we could have sold more with sales people I am not sure. My gut says probably, but not sure that it would be the right way to do it as key point of difference was no hard selling. People had no real difficulty accepting it as a ‘place of purchase’ if you see what I mean. Interestingly, we dealt with many more women than would be the case in a dealership and many more customers from outside the existing Renault-Dacia family.”

However, while that all sounds positive, Linders said there were a number of issues that tripped them up.

“We ran into difficulties as regards brand compliance. This is key as obviously the support of your manufacturer is crucial. As it had not been done before and brand stuff is mostly traditionally focused there was some friction here; understandably, as they have a brand to protect. Were I doing it again I would involve the manufacturer from a much earlier stage,” he said.

“Technology that we were using was not designed for purpose so let us down. This was a key area that needs investment as regards building the car, customising etc. No one’s fault but there was nothing fit for purpose available and we didn’t have the investment. If ever I do it again the technology must be ready and right. Rockar is a brilliant example of this. Also, the test-driving side of things was tricky and we never really got to grips with it.”

Linders feels that, rather than the out-and-out future, the shopping centre model is a half-way step to switching to fully online sales.

“My own personal view is that it is the hybrid next step before full-scale buy and click. You do need to be where the people are, but that needs to be supported by test-driving and delivery centres located somewhere where there’s less expensive real estate.”

With the likes of Amazon making moves towards selling cars online, one wonders if car makers and car dealers might become somewhat distracted by the lure of a shop in a swanky mall, when actually they should be concentrating on getting their online sales systems right. Perhaps that’s a case of Amazon panic though. The online retail giant has muscle, unquestionably, but names as big as Virgin and Tesco have floundered in the past when it comes to selling cars. It’s a tricky business even for those with experience in it.

Peugeot’s Irish operations, at Gowan Distributors, think that we’re just not quite ready as a nation for that yet

So, it would seem that the traditional dealer concept is one that still has some miles left in the tank. Peugeot, for instance, has got in on the ground floor of online sales in the UK (it’s one of only a handful of current brands where you can go from browsing to owning in a few clicks) but Peugeot’s Irish operations, at Gowan Distributors, think that we’re just not quite ready as a nation for that yet.

“The new ‘Order Online by Peugeot’ will be launched in European countries, where there is critical mass, but we simply do not see buying habits in Ireland changing in the short, medium or long term,” said Emma Toner, marketing manager for Gowan Distributors.

“New technology solutions come and go and we’re a tech-savvy nation, but across the country we see clear evidence that Irish customers still choose to walk into their local dealer showrooms, where they are known, where they’ve trusted for 20 years or more, rather than request a test drive online. Thus the smaller number of online test drive requests versus walk-in showroom traffic in Ireland, compared to other countries like UK.

“The advent of out-of-hours online service bookings, social media and chat online has greatly aided time-pressed Irish consumers, but when it comes to buying a car, once the initial research is done online, Irish people like to talk to a person face to face. That’s because it’s in our very nature and culture to forge and nurture relationships – we’re a sociable people. But, crucially, we also like to barter. We like a bargain. We repeatedly see that in our market research. Irish consumers must feel they got good value – it’s essential to them. Online buying doesn’t make room for that. It’s one price, or none.

“And to reinforce what I said earlier, the Irish car market was built by motor dealers, often family-run companies, who are an integral part of community life in Ireland. Our dealers will always be our essential link to our customers.”

Can we just have a few more dealers with elegant, arched windows, though?