Irish airports with pre-clearance for US face competition 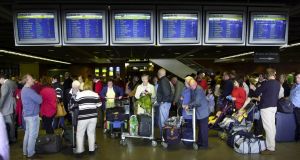 Dublin’s and Shannon’s status as the only EU airports with US pre-clearance is under threat as Washington is considering opening similar facilities in Scotland and mainland Europe.

Pre-clearance allows travellers to go through US customs and immigration checks before flying there so they are treated as domestic passengers when they land, ensuring their quick exit from the airport in which they land.

US authorities favour it because it allows them to prevent “high-risk passengers” from boarding aircraft to the country in the first place.

Dublin and Shannon are the only EU airports with pre-clearance and both use it as a selling point to attract business. However, three other European destinations feature on a list of 11 where the US department of homeland security is considering opening the facility.

The department named Edinburgh airport in Scotland, Reykjavik in Iceland and Rome-Fuimicino and Milan-Malpensa in Italy as possible new sites for pre-clearance in a statement that also includes seven airports in Japan and south and central America.

The service also allows Shannon to attract extra business, including a BA service from London that stops at the midwestern airport. A number of observers suggested that the two Irish destinations could suffer if Washington decides to locate pre-clearance facilities elsewhere in Europe.

Fine Gael MEP Deirdre Clune pointed out that US authorities have already agreed to open pre-clearance at Stockholm’s Arlanda airport. “Right now it is a distinct competitive advantage for Shannon and Dublin, but this may change if the US has pre-clearance in the UK and Sweden as well.”

Airports Council International Europe said on Monday that passenger numbers in Dublin grew 9.7 per cent in the third quarter of the year, and by almost 11 per cent in September, putting it ahead of Barcelona, Copenhagen and Amsterdam.

The council’s director general, Olivier Jankovec, said low-cost airlines such as Ryanair drove the growth at Europe’s airports during the period.