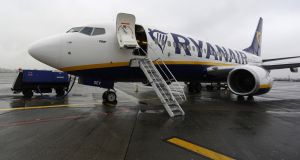 A Ryanair aircraft sits on the tarmac at Dublin Airport. Photograph: Luke MacGregor/Bloomberg

The former head of economic regulation at the Dublin Airport Authority (DAA), Diarmuid O’Conghaile, is joining Ryanair later this year.

Ryanair confirmed yesterday that Mr O’Conghaile would be joining the airline from July 1st as director of public affairs “focussing on our regulatory work in Brussels, and we’re pleased to welcome him to the team”.

His move comes at a time when the airline and airport manager are set to be involved in talks with each other and the Commission for Aviation Regulation (CAR) over the DAA’s plans to build a new runway at a cost of €320 million.

Ryanair supports the plan to build the runway but it and Aer Lingus have questioned the cost, which was originally set at €250 million. Airlines will ultimately have to pick up part of the tab through an increase on the airport’s current €9.87 a head passenger charge.

The airline and the DAA have regularly clashed in the past over issues such as passenger charges and the airport company’s spending plans, including the construction of its second terminal.

Both sides have acknowledged that the relationship has improved in recent years but talks over the bill for the new runway could potentially lead to further disputes between the pair.

The European Commission’s transport directorate plays a big part in setting European aviation policy and overseeing the open skies treaty, which allows low-cost carriers such as Ryanair to compete for passengers across the union.

The Irish airline recently joined forces with rivals Easyjet, Aer Lingus parent IAG, Lufthansa and Air France KLM to establish a new group, A4E (Airlines for Europe), which is lobbying for cuts in airport charges and the introduction of the single European sky, which aims to unify the union’s air traffic control authorities.

The DAA confirmed yesterday that Mr O’Conghaile had left his role at the company but said it was unable to comment further.