Henry Ford III, a great-great-grandson of the motor giant’s founder, is helping to revitalise the auto maker’s spiritual home 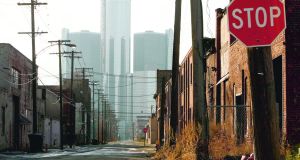 The building and the district of Corktown it’s situated in are much like the rest of Detroit: in desperate need of a facelift. Consisting of a once-stunning Beaux Arts-style waiting hall and an 18-storey tower directly behind it, the train station has fallen far into disrepair since the last Amtrak train departed back in 1988.

The years that followed saw it bought and resold, falling further into decay and used by graffiti artists, homeless people and photographers depicting the otherworldness of urban decline. By the time the city of Detroit was forced to file for bankruptcy in July 2013, the train station perfectly mirrored the slow-motion failure of this once-great car manufacturing city.

Last June, the Ford Motor Company acquired the train station and several nearby land parcels for $70 million (€61 million), and in December started out on a $740 million redevelopment that will see it converted into an innovation and mobility-focused campus, placing the auto company in the heart of a city that made its name more than a century ago.

“We at Ford want to help write the next chapter, working together in Corktown with the best startups, the smartest talent, and the thinkers, engineers, and problem-solvers who see things differently – all to shape the future of mobility and transportation,” executive chairman Bill Ford said last June.

The Corktown campus will also host community, arts and local entrepreneurship facilities as well as shops, restaurants and offices across more than 1.2 million square feet (110,000 square metres). Three years from now, Ford says it hopes to see 2,500 people at work at the iconic train station and in several nearby sites.

Ford and Detroit have been synonymous for a very long time but the Corktown campus is the first time the car manufacturer has anchored itself to downtown Detroit. The investment is seen as a major bet on a city still reeling from widespread economic and social decline that saw it accumulate almost $18 billion of debt.

Over the years, Ford’s fortunes, like Detroit, have suffered. It recently announced the cutting of 12,000 jobs in Europe where six of its 24 factories are due to close by the end of next year, in part because of poor market conditions.

Sales in China, a major emerging auto market, have been falling off a cliff for months. Worse, Ford fell to fourth place among the top-selling auto companies in the US last year. Its share price has hovered stubbornly around the $10 mark for months.

Perhaps the hardest headlines to stomach, however, were that sales of its iconic Mustang muscle car fell in several major international markets last year with it far outpaced by its main competitor, Fiat Chrysler’s Dodge Challenger.

With all that in mind, doubling down in Detroit mightn’t seem like such a bad idea, but nor is it the only arm of the Ford empire that’s turning its focus back to Michigan.

In 2015, the powerful and hugely influential Ford Foundation, established in 1936 as a philanthropic organisation by Edsel, the son of Henry Ford, held its first trustees meeting in Detroit for almost 60 years.

Armed with a $13 billion endowment, the Ford Foundation is a separate entity, completely independent from the automotive operation, and works in social justice and engagement programmes in the US and in developing countries around the world. During the 1970s, relations had soured between the foundation and the Ford family over conflicting views on which direction the former should take. In 1976, Henry Ford II left the foundation after 33 years.

Recent years have seen the foundation commit tens of millions of dollars to the regeneration of Detroit including riverside walkways and redevelopments, neighbourhood revitalisation and low-cost loans.

In 2014, it contributed $125 million to Detroit’s Grand Bargain, a $370 million investment by a host of philanthropic agencies in the city that helped save it from bankruptcy and eventually emerge from state oversight in 2018.

Fronting Ford’s renewed focus on its hometown is a man for whom the weight of history sits heavily – 39-year-old Detroit-native Henry Ford III.

In February, Ford, a grandson of Edsel, was appointed to the foundation’s board, the first time a member of the family has occupied such a position in more than 40 years.

“Our family, over the years, has been making an effort to re-establish connections with the foundation. Since my grandfather stepped down from the board in the late 1970s, my family felt that was unfortunate and several of us have been working over the years to sort of re-establish that connection,” says Ford.

“When Darren Walker [president of the foundation] asked me to join the board it was certainly a great honour.”

The great-great-grandson of the original Ford, Henry Ford III has largely flown under the radar. After college at Dartmouth College and MIT, he taught maths and history to high school kids. He then worked as the Lincoln sales and marketing manager (Lincoln is a subsidiary of the Ford Motor Company) in Irvine, California.

Five years ago, he moved back home to Detroit, and last week attended his first foundation meeting. “The foundation, other foundations and the city of Detroit are making a lot of headway into revitalising a lot of the neighbourhoods that surround downtown Detroit. If you visit Detroit today, in the downtown area, you would really see a different city than you saw 10 or 15 years ago,” he says.

“But when you make your way into some of the surrounding neighbourhoods, they have not caught up to where the downtown area is. Multiple foundations and the city of Detroit are really focused on revitalising a lot of the surrounding neighbourhoods, and building up the infrastructure, services and public schools system to where they should be. That’s the challenge in front of us.”

Unemployment stands at 5 per cent – 1.4 per cent above the national average, while nearly one in every two children in the city lives in poverty. One of Detroit’s most obvious challenges is improving the quality of its roads, which are, to be kind, atrocious.

Hundreds of miles of the city’s highways, side streets and avenues are coated with shoddy, uneven asphalt and dotted with potholes that better resemble craters.

As for the foundation’s expected impact on Detroit, Ford says it is to help reduce inequality and poverty over time. “There is definitely positive movement over the past couple of years … the city’s been doing a lot to improve services like 911 response times and ambulance times, things that really matter to the safety and security of the citizens of Detroit.”

A bumpy 15-minute drive west of the Corktown campus is Dearborn, the neighbourhood from where Henry Ford a century ago changed the automotive and industrial worlds forever. Its streets are littered with signs for the Henry Ford Centennial Library, the Henry Ford College and the Ford Garage diner.

In the 1930s, more than 100,000 workers would emerge from the Ford Rouge car plant on 3893 Miller Road every evening, sweaty and aching from a hard day’s labour. Labourers travelled from as far away as the Deep South, the Middle East and beyond after Ford in January 1914 announced the $5 day – a wage that made headlines worldwide at the time.

Today, visitors to the Rouge plant can peer down on teams of mostly African-American workers monotonously assembling myriad parts of the F-150 pick-up truck – America’s best-selling vehicle for the past four decades.

In the coming years, Ford will all but stop making sedan and small engine cars for the North American market to focus instead on SUVs, pick-ups and crossovers as part of a cost-reduction plan it hopes will save the company $5 billion.

Despite the fact its cars are struggling to move off international forecourts there’s a growing sense that Ford is finally gearing up for the future. It has sought to engage with younger audiences by getting the Ford GT supercar on to the cover of the FORZA motorsport Xbox game in 2016 and its cars feature in online 24-hour races imitating the Le Mans competition.

In January, it announced plans for a full range of electric-powered F series workhorse trucks it hopes to get to market in three years. It’s part of a range of 16 fully electric and 40 hybrid models it plans to create by 2022.

A feature film titled Ford v Ferrari that’s slated for release in November (named Le Mans ‘66 in Europe) is sure to draw renewed interest in the company and its long and chequered history. Ford says he has yet to see the film, which stars Christian Bale and Matt Damon and is set around the 1966 edition of the famed 24-hour race.

“It will maybe embellish a few things because it’s more of a mainstream Hollywood picture. But it’s still, at the end of the day, a great story,” Ford says. “It’s a great part of our legacy.”