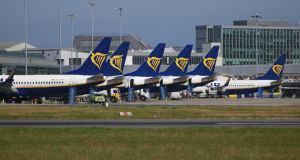 The number of passengers carried by Ryanair fights rose 8 per cent last month, the airline said, with the company carrying 13.6 million people in June.

The airline had a load factor – a measure of how full flights are – of 97 per cent.

Ryanair took control of Laudamotion in January, having previously owned a 75 per cent stake in the airline. It was founded by the late Formula One motor racing driver Niki Lauda.