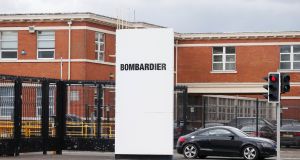 Bombardier’s Northern Ireland operation has taken “steps to mitigate the potential business impact in the event of a no-deal Brexit, ” the company’s latest annual report states.

The company views Brexit as “one of its main business risks” but in the report directors claim they are confident that the “business is in a strong position to react quickly at the appropriate time when the future UK/EU relationship does become clear”.

The Canadian group’s Northern Ireland business, which is known locally as Short Brothers, is currently up for sale.

But the Northern Ireland operation also incurred exceptional costs of more than $40 million, including restructuring pension charges that resulted in overall losses for 2018 of more than $4.2 million.

The annual report highlights that Short Brothers’ principal business continues to be the design, development and manufacture of aircraft components and related products, and services for Bombardier business aircraft, and Bombardier commercial aircraft.

It also manufactures and supplies components to other aircraft manufacturers, and provides an aftermarket service including maintenance and repair.

Bombardier signalled its intention last month to exit the commercial aircraft sector with the sale of its CRJ programme to Mitsubishi. Around 350 people currently work on the CRJ programme in Northern Ireland.

According to the annual report Short Brothers’ total workforce fell during the year to 3,799 people.