Fly Leasing profit falls more than a third to $7.9m 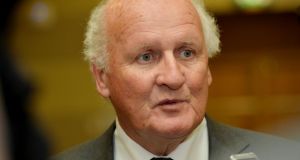 Profits at Fly Leasing, the Irish-based aviation financier headed by former Aer Lingus chairman Colm Barrington, fell more than a third to $7.9 million (€6.7 million) from $11.7 million in the first six months of this year, the company said on Thursday.

Mr Barrington said the company had expanded its fleet by spending $290 million on new aircraft, including four bought from manufacturers.

“The five aircraft are on leases with an average term of 11 years, further enhancing the overall quality of our fleet,” he added.

Mr Barrington said the company expected to see improved earnings from these aircraft and others in its pipeline.

Fly bought 2.1 million shares back from investors for $27.2 million during the period at an average of $13.06 each. At June 30th, about $39.4 million remained under the share purchase authorisation.

Subsequent to that date, Fly repurchased a further 740,957 shares at an average of $13.77. As of August 9th, about $29 million remained under the company’s share purchase authorisation.