Road warrior: the business of travel 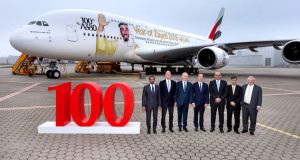 Air France-KLM has announced it will introduce an €11 fee for bookings made on GDS (computerised reservations systems) from April 1st, 2018. The fee will hit hardest travel agents using GDS systems to make bookings, which could result in them passing on the cost to their clients.

The airline group said it was implementing the charge “in order to adapt to market circumstances and to further improve its efficiency”. Air France-KLM put forward the plan in its third-quarter results, which showed the group saw a nearly 39 per cent increase in operating profits to just more than $1 billion (€860,000) and a 5.1 per cent rise in passenger numbers.

Gulf carrier Qatar Airways has agreed to purchase a 9.61 per cent stake in Cathay Pacific for about $662 million (€569 million). Qatar will own nearly 400 million shares in Cathay Pacific and would have bought more if they were available.

Qatar chief executive Akbar Al Baker said: “Cathay Pacific is a fellow Oneworld member and is one of the strongest airlines in the world, respected throughout the industry and with massive potential for the future.”

This week Emirates took delivery of its 100th Airbus A380 in Hamburg. The airline uses the A380 as its workhorse aircraft. The cost for a new A380 is in the region of €492 million and can carry up to 600 passengers. Airbus production has been almost completely tied to Emirates for the past number of years.

Air Canada has moved the Dublin to Toronto service back to Air Canada mainline from its low-cost carrier Air Canada Rouge. The service will operate all year round as flight AC843.

There will be three class services on board: economy, premium economy and international business class, which will have lie-flat beds, enhanced service and concierges for assisting passengers with reservations, entertainment tickets and hotel and restaurant bookings.