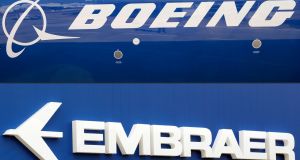 The Boeing and Embraer logos. The collapse of the deal will be seen as a blow to Boeing, which had moved to broaden its portfolio of aircraft to compete with European rival Airbus. Photograph: Getty Images

Embraer has accused Boeing of making false claims to justify walking away from a $4 billion (€3.7bn) deal to acquire the Brazilian group’s regional jet business. The deal collapsed on Saturday after the US aircraft-maker said it had tried for two years to finalise the deal before the termination date, which fell on Friday, but ultimately negotiations were unsuccessful.

Embraer said Boeing had “manufactured false claims as a pretext to seek to avoid its commitments to close the transaction and pay Embraer” $4.2 billion for the purchase.

“We believe Boeing has engaged in a systematic pattern of delay and repeated violations of the MTA [master transaction agreement] because of its unwillingness to complete the transaction in light of its own financial condition and 737 Max and other business and reputational problems,” Embraer said on Saturday.

The Brazilian group said it believed it was “in full compliance with its obligations”, adding that it would pursue all remedies against Boeing for the damages incurred due to the “wrongful termination and violation” of the agreement.

In response Boeing said it “believes it is within its rights to terminate the agreement”.

“But we have reached a point where continued negotiation within the framework of the MTA is not going to resolve the outstanding issues.”

The collapse of the deal will still be seen as a blow to Boeing, which had moved to broaden its portfolio of aircraft to compete with European rival Airbus, which in 2017 had swooped on Bombardier’s C-Series, a 100-150 seater regional jet.

Embraer could also find it tougher to compete against the Airbus-backed C-Series – now renamed the A220 – in a market which is expected to be substantially smaller in the coming years as a result of the global lockdown on air travel.

The Boeing-Embraer tie-up faced several obstacles over the past year and a half, with substantial political opposition in Brazil while in Europe regulatory approval has taken longer than expected.

The year-long grounding of the 737 Max had already strained Boeing’s cash resources, and now the coronavirus has significantly reduced expectations for aircraft demand in the coming years. Roughly two-thirds of the global fleet has been grounded, with airlines around the world seeking government bailouts to survive. Many expect to emerge from the crisis with significantly smaller fleets.

Boeing, which has estimated the cost of the Max grounding at $19 billion, is also under severe cash pressure as airlines cancel and defer large volumes of orders.This had reduced the likelihood of any deal taking place, said one analyst.

“It’s a liquidity question,” said Bank of America analyst Ron Epstein. “Is Boeing in a position to spend $4 billion on an acquisition given what’s going on in the broader commercial aviation market?”

Boeing is widely expected to receive financial support from the US government’s recent stimulus plan. The company’s chief executive, Dave Calhoun, has said Boeing and the wider aerospace supply chain would need $60billion to survive the current crisis.

The group is expected to slash production next week when it announces first-quarter results, and will have to revise cash flow expectations as a result.

Airbus earlier this month cut production rates by one-third, including its best-selling A320 single-aisle family. Further cuts are possible depending on the extent of the aviation downturn.

The collapse of the Boeing-Embraer deal follows the decision by Hexcel and Woodward – two of the US company’s big suppliers – to pull the plug on their $6.4 billion merger, the first big deal to collapse due to the coronavirus pandemic.

Under the agreement Boeing would have taken an 80 per cent stake in Embraer’s jet business.

Boeing on Saturday said it would continue a separate partnership agreement with Embraer to jointly market and support the C-390 military transport. Embraer will hold 51 per cent of this separate venture and Boeing 49 per cent.

Nelson Salgado, Embraer’s chief financial officer, told the Financial Times last year that the deal would have allowed “revenue growth for Embraer which it otherwise would not be able to achieve on its own”.