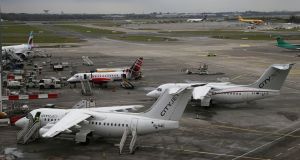 The High Court has appointed an interim examiner to the Dublin-based regional airline CityJet.

The airline and its subsidiaries, which flies routes on behalf of other airlines including SAS and Aer Lingus, employs 1,175 people, more than 410 of whom are based in Dublin.

CityJet, which is best known for flying routes out of London City Airport, sought the protection of the courts from its creditors due to financial difficulties that were exacerbated after its fleet was grounded by the Covid-19 outbreak.

The impact of the virus, the company’s counsel Rossa Fanning SC told the court, interrupted and adversely affected a planned merger with another airline and a proposed private restructure of the company.

However, despite the uncertainty in the aviation industry caused by the pandemic, CityJet says the business can be saved following a successful examinership process.

At the High Court on Friday Mr Justice Garrett Simons said he was satisfied to appoint experienced insolvency practitioner Kieran Wallace of KPMG as interim examiner to CityJet DAC.

The judge said while the company was insolvent and unable to pay its debts as they fall due, he accepted evidence from an independent expert that the airline had a reasonable prospect of survival if certain steps were taken.

Cost-cutting measures have also been introduced, which the company says will result in the saving of millions of euro.

Mr Fanning, appearing with Stephen Byrne, said the company founded by respected entrepreneur Pat Byrne, who is one of the company’s current directors and its executive chairman, had been in business since the early 1990s.

According to counsel, the company no longer flies scheduled routes itself and has moved to a model known in the aviation industry as wet leasing, where it provides serviced aircraft and crews to operate routes for other carriers.

In each of the past three years, the business had revenues of more than €220 million. The company had made a profit in 2017, but suffered significant losses in 2018 and 2019 due to various factors.

Counsel said the company had debts of €500 million, and a net deficit of liabilities over assets on a going concern basis of €186 million.

Its creditors include the Triangle Group, companies involved in the leasing of aircraft, Investec, the Revenue Commissioners, as well as debts owed to related companies.

To counter its difficulties, plans had been put in place to restructure the business and merge with Spanish airline Air Nostrum. But the airline’s fleet of 33 aircraft, which mainly fly routes around the Nordic countries and Scandinavia, were grounded as a result of the coronavirus outbreak.

Counsel said there were positive aspects, including that the company’s main customer SAS had agreed to support it during the current hiatus, and that there had been positive engagements with its creditors.

While a return to commercial flying was uncertain, the company expected its services would return gradually over the coming months, and that the company could make a profit if the examinership process was successful.

Counsel said the appointment of an examiner would be beneficial for all parties concerned.

The judge said he was satisfied from the evidence put before the court that an interim examiner should be appointed to the firm.

The examinership, the judge said, would be a complex one when all matters including the amount of debt involved were taken into account, and he said no time should be lost in a process that must be completed within 100 days.

Mr Justice Simons adjourned the matter to a date later this month.