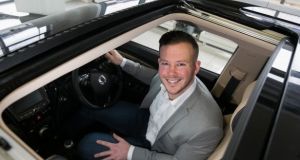 Maurice Sheehy, founder and chief executive of Fleet. The company has valued at over £3 million following its latest fundraising

More than 130 backers of Irish start-up Fleet have seen their original investment soar in value after the company recently raised nearly £350,000 (€406,382) in a crowdfunding round that values it at over £3 million (€3.4 million).

Investors who backed the Co Wicklow-based start-up in an earlier €384,000 fundraise via the Dublin-based Spark Crowdfunding platform have seen the value of their investment rise by over 250 per cent.

In addition, the investors will be able to apply for a significant tax refund because Fleet is an EIIS-approved company. The employment and investment incentive scheme (EIIS), is a State-backed initiative that allows small investors to claim relief on investments in early-stage companies.

Fleet has developed a peer-to-peer software platform that allows motorists to earn extra money by hiring out their private cars when they are not using them. With just 4 per cent of vehicles in use at any one time, it means that those whose vehicles are sitting idle, can make money from them.

Using the Fleet app, users can arrange deals with car owners for the private rental of vehicles. Prices vary according to vehicle types. Insurance is provided through a deal the company has with Axa.

The company was founded by businessman Maurice Sheehy in 2017 and it has more than 20,000 users. It has won a number of contracts with car companies, including with Toyota with whom it partnered for a new service offering vehicle hire from car dealerships.

The proceeds of the latest fundraise are to be used to help the company expand beyond its core markets of Ireland and Britain.

“We are delighted to see Fleet raise new funds at a valuation well in excess of its valuation 15 months ago. It’s a fantastic validation of the company’s performance and business model,” said Chris Burge, chief executive of Spark Crowdfunding.

“We’re quite selective about the companies we allow to raise funds on our platform, and are delighted to see our investors achieve such a gain on their investment in such a short period of time,” he added.

1 Belgium helps Ireland to a Brexit boon
2 Can Grafton Street stop the flood of closures?
3 ‘My rent here is so low it’s a joke’
4 New Powerscourt Springs hotel to open in defiance of virus gloom
5 Bank of Ireland launches €200,000 prize fund
6 Greek loans earn €1.3bn for Germany in last 10 years
7 Why gift a son now if it eats into his tax-free inheritance threshold?
8 Remote working: How to get ahead in a changed world
9 Merchant Hotel owner temporarily lays off 800 staff in the North
10 Is Ireland’s booming economy just an illusion?
Real news has value SUBSCRIBE