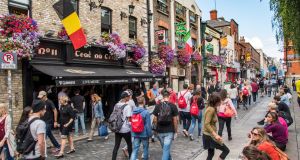 Fáilte Ireland says it is in talks to assist property developers interested in building large-scale hotels in Dublin of up to 1,000 bedrooms, as the State tourism authority targets more business visitors.

Paul Kelly, the authority’s chief executive, says the lack of hotels of such scale within Dublin city is costing the industry “tens of millions of euro” in lost international conferencing business.

Mr Kelly was speaking on the fringe of the authority’s Meitheal showcase, the huge annual gathering of tourism businesses and international buyers taking place this week at Citywest on the city’s outskirts. More than 300 buyers and 600 Irish businesses are attending, with 13,500 “pitch” meetings scheduled.

Fáilte Ireland this year widened the event to specifically target more business tourism, as it seeks to diversify the industry in the face of challenges such as Brexit. The authority is targeting €1 billion in business tourism revenues by 2025, compared to the €760 million achieved in 2017.

While a swathe of new hotel developments are coming online in Dublin, Mr Kelly lamented the lack of large-scale properties planned of “800 to 1,000 rooms”, which he said would help to attract conferences from companies keen to house all of their delegates under one roof.

He said such a hotel is needed within the city centre, ideally close to the Convention Centre Dublin on the city’s quays.

“We are actively engaged with property developers in discussions about the options regarding sites,” he said. “We’re encouraged by the conversations to date. I think we will solve [the problem of the lack of large hotels].”

Citywest is the State’s biggest, with close to 800 rooms, but it is almost 20km out of the city. The next largest, the Clayton on Burlington Road towards the south of the city centre, has about 500 rooms.

About 60 of the international buyers attending Meitheal are focused on business tourism such as events and incentive travel, where companies reward staff, such as a sales team, with trips abroad.

Ciara Gallagher, the manager of Fáilte Ireland’s Meet in Ireland business tourism division, said buyers from the US, France, Germany, Canada and the UK were represented. She said UK-based tourism buyers servicing corporate clients in markets including Russia, China and India were also present.

“The average spend of a business guest is about €1,600, up to three times a leisure guest,” she said.

She said Fáilte Ireland has recruited a number of “ambassadors”, including academics and scientists, whom it helps to pitch for international conferences in their field to come to Ireland.

It is also developing links with US-based members of the Irish diaspora employed in the corporate world, to encourage them to suggest Ireland as a meeting destination.

Meitheal, which has taken place annually since 1975, revolves around matching buyers and Irish businesses in 10-minute “speed dates”.

The event is also being used this year to effectively launch the Hidden Heartlands tourism brand for the midlands and border regions to the international market.

1 Bank leaked my loan request to family who tried to rip me off
2 Eason acquires rival Dubray Books for undisclosed sum
3 Solar panels: Are they worth the investment?
4 Fuel company loses €1.35m challenge over tax bill in ‘green diesel’ case
5 Siblings who became ill next to wind farm settle case
6 Average weekly wage rose to €783 in final quarter of 2019
7 Ryanair and Aer Lingus monitor impact of coronavirus on travel to Italy
8 Can I see my father’s previous wills?
9 Accumulated profits at David McWilliams’ media company hits €675,000
10 Are high-flying stock markets about to ‘feel the Bern’?
Real news has value SUBSCRIBE