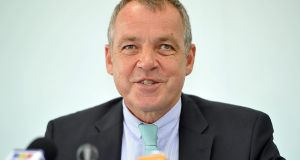 Christoph Mueller intends to remain with Malaysia Airlines as a non-executive director and will serve a six-month notice period until September to facilitate an orderly transition, the airline said.

Christoph Mueller, the chief executive of Malaysia Airlines, told his staff he was leaving the national carrier for reasons that are personal and “beyond my control,” according to a letter he wrote to them.

“The show must go on,” Mr Mueller wrote to employees on Tuesday, informing them he was leaving the carrier in September, according to a copy of the letter seen by Bloomberg .

The resignation is for “personal reasons, which are beyond my control,” Mr Mueller wrote without elaborating.

Mr Mueller’s unexpected resignation comes as the carrier is beginning to turn around after two plane crashes in 2014 dented its sales and reputation, prompted the government to buy out all shareholders and take the company private.

A veteran of a turnaround effort at Aer Lingus, Mr Mueller was charged with reviving a carrier that was racking up losses even before hundreds of people died in the two crashes.

”The company is making very good progress and we are on track with our plan,” Mr Mueller wrote. “We have delivered our financial budget for the first three months of 2016, our on-time performance is increasing and very stable and our customer service index is recovering with more significant improvements in the pipeline.”

After cutting 6,000 jobs, reducing pay, and trimming capacity by 30 per cent, the onus is now on Malaysia’s government to find a successor to continue the revival plan put in place by Mr Mueller, who became CEO-designate in March 2015.

Malaysia Air is on track to return to profitability as the airline’s restructuring effort is proceeding as planned and the company is finished laying off employees, Mr Mueller said in February.

Mr Mueller intends to remain with the company as a non-executive director and will serve a six-month notice period until September to facilitate an orderly transition, the airline said.

The board has appointed chief operations officer Peter Bellew as an executive director, it said.

“We have already seen a profit in February and we are also ahead of budget, which gives a strong indication that our turnaround initiatives are pulling faster than expected,” Mr Mueller wrote in the letter.

“Therefore, I feel particularly sad to leave the company when we see the first pay back of the hard work of the team.”