STR tells hoteliers that visitors from the UK will dip by 1.3% this year while number of US visitors will increase 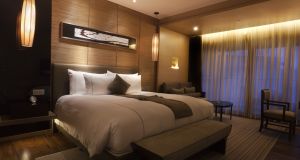 According to STR Top hotels in Dublin charged an average of €225 per night in the first five months of this year. Photograph: iStock

The average daily rate of a hotel room in Dublin is expected to reach just shy of €150 a night by 2021 while occupancy rates will exceed 85 per cent, according to a forecast released by travel research company STR.

At an event in Dublin’s Westbury hotel, at which Dublin hotel figures for May were released, individuals from the hotel sector were told that arrivals from the UK are expected to dip by 1.3 per cent this year while US visitors will increase by 8.7 per cent.

In May 2017 Dublin offered good value for money compared to European counterparts. The average daily room rate was less than €125 with occupancy just shy of 80 per cent. Based on average figures, Dublin was cheaper than other cities like Amsterdam, Barcelona, Paris, Zurich and London but more expensive than Edinburgh, Berlin and Vienna.

Dublin’s occupancy rate was considerably higher than the European average which was 67.7 per cent in May while the average daily room rate was also higher in Dublin by around €20.

Compared to May 2016, Dublin’s revenue per available room increased by some 7 per cent – lower than London’s 11 per cent increase and Paris’s 12 per cent jump.

In terms of Ireland as a whole, occupancy in the five months to May was still above the European average at 73.2 per cent while the average daily room rate was over €119, a 6.3 per cent jump on the same period in 2016.

As with trends in previous years occupancy has been steadily edging up in the first five months of this year with regional hotels closing the gap with Dublin hotels.

Kerry was the worst performing county mentioned in the report when it came to occupancy in May 2017 with rates hovering around the 55 per cent mark. Dublin was at the top of the class. When Dublin is broken down into regions, Dublin airport achieved the highest occupancy rates while the city centre achieved the highest average daily room rate at around €150 in the year to the end of May 2017.

Somewhat surprisingly, Saturday had the lowest occupancy rates in Dublin hotels in the first five months of this year, while Friday had both the highest occupancy and most expensive rooms. Compared to the same period last year, Saturday’s room occupancy dropped by 1.3 per cent.

Top hotels, or upscale as defined by STR, charged an average of €225 per night in Dublin in the five months of this year. That was slightly lower than Belfast on a constant currency basis.