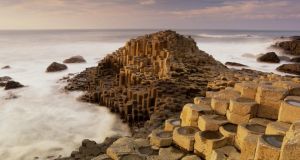 The Giant’s Causeway in Co Antrim.

Senior figures within Irish tourism, which is heavily exposed to the effects of Brexit and weak sterling, have expressed hope that the hung parliament in the UK election could lead to an easier ride for the industry along the Border.

Paul Diver pricked public consciousness in 2011 when he bought the 55-bedroom Sandhouse Hotel in Rossnowlagh in Co Donegal, on the Wild Atlantic Way, from a receiver for the price of a three-bed semi.

He said the support of the DUP for a Tory government could have a “positive effect” for Ireland. Mr Diver, who is also the Donegal representative of the Irish Hotels Federation, predicted the DUP would not want a hard Border.

“Arlene [Foster, the DUP leader] is from the Border region. She has lived through checkpoints. She won’t want to go back to that,” he said.

Mr Diver said any slide in sterling would likely have little immediate effect on the hotels along southern side of the Border.

“The bookings are already made and this year is significantly up on last year. Despite the weaker sterling, the UK market is still holding up well.”

Some within the Border tourism industry fear, however, that weaker sterling will hit short-break visitors from Northern Ireland, and tempt southern customers north across the Border.

Eoghan O’Mara Walsh, chief executive of industry umbrella group, the Irish Tourist Industry Confederation, said he expects that the DUP would have no interest in promoting any hard Border moves that would “limit trade”.

“Theresa May’s rejection at the polls might make for a softer Brexit,” he said.

Mr O’Mara Walsh warned, however, that the industry is still exposed to the potential effects of Brexit, including any further slides in sterling.

Drops in sterling make Ireland’s tourism industry less competitive for its biggest source market – the UK accounts for 40 per cent of all visitors here.

“CSO data shows that UK numbers are down 11 per cent. This is not an industry crying wolf,” he said.

He expressed hope that the expected elevation of Leo Varadkar to taoiseach would raise the profile of the industry at Cabinet. Mr Varadkar was the minister who introduced tourism’s special 9 per cent VAT rate in 2011, and abolished the airport tourist tax.

“He gets tourism and he sees the benefit of the industry. We hope he continues to be a supporter.”

1 Basic income for all: Has the Covid crisis given us a new economic model?
2 Only way is up for Stripe as valuation skyrockets
3 ‘I don’t need to do any of this. . .I don’t actually need to work.’
4 Promontoria barred from pursuing doctor over Ulster Bank loan
5 Direct sea routes to Europe offer certainty in choppy Brexit waters
6 Kinzen raises $2.2m as it helps clients fight ‘misinformation’
7 Online shoppers face unwelcome tax surprise
8 Pandemic brings a halt to Zara-owner’s Irish expansion
9 How long can Government afford to keep State pension age at 66?
10 RTÉ board should not tune out from digital expertise
Real news has value SUBSCRIBE