Move would see low-cost carrier competing with the Irish airline 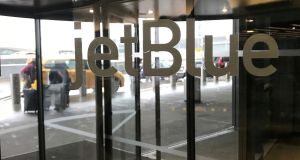 JetBlue has bases at New York JFK and Boston Logan, airports to which Aer Lingus flies from Dublin. Photograph: Reuters

Aer Lingus’s US partner JetBlue has hinted that it could offer transatlantic flights to Dublin in competition with the Irish airline.

The pair have been partners for 11 years, offering connections on each others’ flights from Irish and US airports to passengers flying between Europe and North America.

JetBlue’s chief executive Robin Hayes indicated that the low-cost airline would consider flying between the US and Dublin as the company announced plans to launch its first ever transatlantic services from Boston and New York to London.

Adding Dublin would see it competing directly with Aer Lingus, which has been growing its North American services and sells itself as the “value transatlantic carrier”.

JetBlue has bases at New York JFK and Boston Logan, airports to which Aer Lingus flies from Dublin.

Significantly, the US carrier has ordered 13 Airbus A321neo long-range aircraft, the same ’plane that Aer Lingus is buying because it is cheaper to fly over the Atlantic than others used on long-haul routes.

Aer Lingus chief executive, Sean Doyle, recently said that the A321 would open new Norther American destinations to the airline, particularly on the east coast.

Speaking to the New York Times, Mr Hayes, said that the craft could open more European cities to JetBlue such as “Dublin, Paris and Amsterdam”.

Aer Lingus stressed on Thursday that its relationship with JetBlue was “mutually beneficial”, adding that it looked forward many successful years working with its US partner.

“Aer Lingus’s mission to be the leading value carrier across the North Atlantic is enabled by many factors, including our key 11-year relationship with JetBlue,” the airline said.

The Irish carrier flies into JetBlue’s terminals at New York JFK and Boston, from where passengers can connect to flights to a large number of airports across the US.

JetBlue, known for offering cheap flights across the US, intends to commence transatlantic flights from 2021.