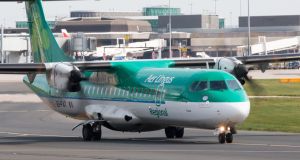 Staff directly employed by Stobart Air in the Republic voted overwhelmingly in favour of industrial action in a dispute over pay, conditions and union recognition.

A spokesman indicated their trade union, Fórsa, could serve strike notice on the airline by Thursday. This could leave Stobart facing possible stoppages in as little as seven days.

Stobart Air operates Aer Lingus Regional services, connecting the Republic with provincial airports in Britain, under a contract with the larger carrier. Any industrial action would hit these flights.

Aer Lingus is not directly involved in the dispute between Fórsa and Stobart. The airline noted the ballot’s result but said it would wait for any notification of industrial action before commenting further.

Fórsa says the dispute is over Stobart’s refusal to negotiate with the union on staff pay and working conditions.

Union official Ashley Connolly noted that the ballot’s result gave Fórsa a clear mandate and said the disputes committee would consider its next steps.

“Management’s refusal to do business in the usual way has left its staff feeling they have no choice but to consider industrial action,” she declared.

Fórsa’s week-long ballot ended on Wednesday. More than 100 Stobart cabin crew are members of the union.

Stobart said that it had not received any correspondence about the vote. “Our airline maintains an engaged and collaborative relationship with all staff on a regular basis and we remain committed to dialogue and engagement,” a spokeswoman added.

The airline is negotiating an agreement with the Irish Airline Pilots’ Association, a Fórsa affiliate, and has told the union that it ultimately intends doing the same with cabin crew.

A Fórsa spokesman confirmed that Stobart had written to the union stating this, but said cabin crew believed the company was fobbing them off.

“They have no real interest in negotiating directly with the union,” he argued.