Offer made by German carrier for planes, runway slots and air crew 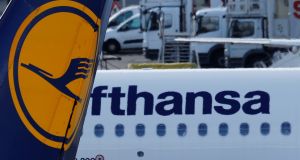 German airline Lufthansa has submitted an offer for parts of Alitalia and a plan to reshape Italy’s ailing national carrier just days after agreeing to buy some of Air Berlin’s assets.

Lufthansa’s offer is not for the whole Italian airline, but only for parts of its network, meaning it may not find favour with Rome, which wants to sell Alitalia in one package and avoid a split of its aviation and ground service activities.

Possible job cuts are also likely to stoke resistance to the Lufthansa approach.

Italy had on Friday delayed the sale process, extending to April 30th a deadline to improve the bids which had previously been set for November 5th.

The German carrier did not provide details of its offer but said it included plans for what it termed a new Alitalia.

“The offer includes a concept for a newly structured Alitalia with a focused business model (“NewAlitalia”), which could develop long-term economic prospects,” it said.

The paper said the offer was likely to be rejected by the state commissioners who are managing the carrier while it is being sold.

The offer from Lufthansa, which also owns Brussels Airlines, Swiss, Austrian and Eurowings, comes after it agreed a deal last week for large parts of Air Berlin, which will see its Eurowings budget unit grow to 210 aircraft from 160.

Cut-throat competition on short-haul routes in Europe has pressured several airlines, with British leisure carrier Monarch also collapsing this month, on top of the administration processes for Air Berlin and Alitalia.

Carriers such as British Airways parent IAG and Norwegian Air Shuttle have said they would be interested in some Monarch airport slots, while easyJet said it is in talks for 25 Air Berlin planes at Berlin Tegel airport.

Alitalia, which has made a profit only a few times in its 70-year history, filed for special administration this year after staff rejected a plan to cut jobs and salaries.

Lufthansa chief executive Carsten Spohr said last week he was only interested if a new Alitalia could be created.

Ryanair had also been interested in making a bid, provided Alitalia could be drastically restructured. However, it pulled out to focus on its rostering issues.

On Friday the Italian government also passed an emergency decree to add a further €300 million to the loan of €600 million it made to the loss-making carrier in May and extend the repayment deadline.