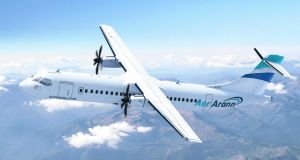 Minister for the Gaeltacht Joe McHugh said competition for the State’s Aran Islands air-service contract remains “live” as hundreds of islanders called for the retention of the service.

Mr McHugh said Executive Helicopters was the “preferred tenderer” for the contract but “there’s no contract signed . . . there are opportunities for unsuccessful tenderers to make an appeal”.

It is understood Aer Arann Islands, which has operated flights to the islands for 44 years, is considering seeking an injunction against any decision to award the contract to Executive Helicopters, based in east Galway. “There has been correspondence from one of the companies to say that they may take a High Court injunction in relation to this,” the Minister said.

The Minister was speaking after attending separate meetings in Furbo, Co Galway, with local elected representatives and a delegation from the islands.

Islanders have asked how Aer Arann Islands could have been outperformed by a helicopter company with virtually no experience servicing the islands. Doubts have also been raised about the ability of Executive Helicopters to operate out of Galway airport in the new year. Galway County Council, which controls the lease on the airport, “has not been involved in discussions regarding the proposals for a public service obligation air contract for the Aran Islands”, a local authority spokesman said.

About 40 jobs are expected to be lost at Aer Aran Islands if the tender is transferred. At the Furbo press conference, Cathy Ní Ghoill and Tarlach de Blacam said islanders’ needs have been ignored and the decision represents a “negative policy towards the Aran Islands and the Gaeltacht in general”.

According to the Department of Arts, Heritage and the Gaeltacht, a minimum of two return flights will operate daily by helicopter from Galway airport at Carnmore, 52km away from Aerfort na Minne, used by Aer Arann Islands. The location is important because if a flight is cancelled, islanders can get a boat from nearby Ros a’Mhíl.