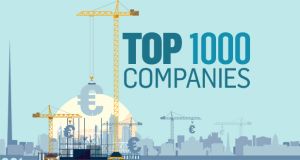 Profits at Ireland’s Top 1000 companies roared to a record high of some €36 billion in the 2016 survey, as the country’s top companies shrugged off the shadows of the recession and reported stellar growth.

According to the TOP 1000 2016, the definitive database of Ireland’s leading companies, corporate Ireland continues to return to form, buoyed by recovering demand and favourable exchange rates. On a net basis (subtracting losses from the profit figure), profits of the 1000 companies rose to € 28 billion (or € 36bn in total), up considerably from the figure of € 22.4bn reported in the 2015 survey. And the figure is likely considerably higher, given that some of the giants of Irish business, such as Apple, Intel and IBM, do not disclose financial statements for their Irish operations.

Even Ireland’s top financial services companies benefited from the recovery, reporting combined profits of some € 12 billion. Moreover, of the 80 financial services companies listed in the survey, just 14 per cent reported a loss - a distinct change from years gone by when the pendulum swung firmly into the red. Profitability was also strong in the top ten. Just one company - Allergan - reported a loss in its most recent financial year. Indeed the other nine companies reported a staggering € 8.2 billion in profits in one year alone - and this does not include profits for Apple Ireland. Curiously perhaps, internet giant Google did not contribute much to this figure; its profits slumped to just €200,000 at its Irish operations in its most recent financial year.

However, revenue growth may be stalling. Where comparable figures are available*, some 58 per cent of companies grew their turnover in their most recent financial year. This is down on last year’s survey, when some 65 per cent reported an increase in revenues.

What a difference a year - and one or two hefty tax inversion deals - can make. Or not. Despite Ireland being in the news thanks to a couple of blockbuster deals and intended relocations from the US to Dublin, the major change in Ireland’s top ten companies is not driven by a US company looking to cut their tax bill by moving across the Atlantic. Rather it’s due to a business, with Irish foundations but with its focus firmly on international markets, recapturing its position at the top.

While US software giant Microsoft may have roared into pole position for the first time in last year’s survey, and posted sales of a not inconsiderable € 20 billion last year, it has been usurped this year, not by another US multinational but by Ireland’s very own construction behemoth CRH. Thanks to strong momentum in the Americas, the company known once upon a time as Cement Roadstone, saw its turnover soar by 25 per cent in the year to a whopping € 23.6 billion in 2015, putting it comfortably ahead of Microsoft once more. And, thanks to a strong dollar and weak energy prices, it also broke the € 1bn pre-tax profit barrier for the first time.

However, CRH’s dominance - which it has held since the survey first began in 2002, apart from Microsoft’s assumption of the top spot in 2015 - is likely to be under threat next year, thanks to the recent spate of blockbuster deals in the pharma space.

Elsewhere, tech companies such as Google, Dell and Apple once again make the top ten, but the impact of tax inversions is most notable. Last year, US pharma group Medtronic acquired Dublin-domiciled surgical supplies group Covidien in a high profile $50 billion inversion deal. Given that the newly constituted Medtronic has yet to report on a full year basis, the company is still sitting comfortably in the top ten with turnover of about € 18 billion. However, when their revenues are combined, Medtronic may well steal the crown once again from CRH, given that the company’s combined sales are expected to be of the order of about € 23 billion. And, if another deal had gone ahead, Medtronic itself might have been usurped by the merger of pharma giant Pfizer with Allergan. However, this deal was pulled, against a background of increased scrutiny by US authorities of tax-related M&A deals. If it had gone ahead, the new entity could have combined revenue of more than $50 billion, sending it straight to the top of the TOP 1000. For now, Medtronic is beaten by power management company Eaton, which relocated to Dublin in 2012 following its acquisition of Cooper Industries. It holds the number three spot on turnover of more than €18 billion, with Allergan (which was acquired by generic drug company Actavis but has kept the name Allergan) and Ingersoll Rand other global companies - which are now domiciled in Ireland - also making the top ten.

WHO’S PAYING THE MOST TAX?

RECOVERY DIGS IN FOR CONSTRUCTION

It’s been a turbulent decade or so for the construction industry, and many of the names that would have once graced this survey have since found themselves victims of the downturn.

Nonetheless, the tide, at least for many in the sector, looks finally to have turned. Of the 100 or so companies engaged in the construction sector in this year’s survey, just 12 per cent reported a loss in their most recent financial year, the most significant being Doosan Holding’s € 122 million loss, with some 88 per cent of construction companies back in the black. And, some 70 per cent of companies grew their turnover in their most recent financial year, often by some significant amounts.

The big names of the Irish construction sector, CRH, Grafton Group and Kingspan all reported strong growth, but double-digit growth was also in evidence elsewhere.

Construction companies were some of the fastest growing in the year, with our Rising Stars (page 8) featuring names like Galway firm Stewart, which was founded by James Stewart in 1902. With turnover growth of 129 per cent it continues to grow strongly.

Mac-Interiors, which specialises in commercial real estate refurbishment and office fit-out, had a stellar year, as it reaped the benefits of a vibrant Irish commercial property market. It almost doubled its revenues in 2015, reporting growth of 86 per cent to € 50 million, as it fitted out offices for companies like HubSpot and Oracle.

Established in 1994, Mythen Construction, which was responsible for the Millennium Business Park in Naas, for example, also enjoyed strong growth, as it grew revenues by 54 per cent to € 29 million in the year to May 2015, while profits soared to € 1.6 million, up from € 0.02 million previously.

But as elsewhere, some companies in the construction sector are continuing to diminish.

Carillion continued to wind down its construction business during the year, opting instead to focus on the services side of the business. As a result, it saw its Irish revenue drop by 86 per cent to € 2.6 million. Imtech Suir Engineering, which provides design and installation services and maintenance, saw its revenues decline by 32 per cent in the year to € 88 million.

WHO’S MAKING THE MOST MONEY?

Considering it paid the most tax in this year’s survey, it also perhaps makes sense that Medtronic should have made the most profi ts. It reported profi ts of a staggering € 3 billion in 2015, possibly the highest ever profit fi gure for an Irish company.

But it’s not alone in the € 1 billion profits club. This year there are ten companies in the € 1 billion+ profi ts gang, with low-cost airline Ryanair just narrowly missing the cut, on profi ts of € 982 million. Nonetheless, there are several other Irish names in the group – AIB, BOI and CRH among them and, showing that the banks have embarked on a reversal of fortunes, Ulster Bank, with profi ts of € 1.01 billion, also joins the group.

But it is the regulator, the Central Bank, which has again beaten the banks in terms of profi tability, posting a not inconsiderable profi t of more than € 2 billion for 2015.

Such a profi t fi gure is largely due to the sale of holdings of special government bonds which the Central Bank took on when the IBRC was liquidated in 2013. The other companies making up the top ten are now all known as Irish companies, by virtue of redomiciliations or tax inversions.

But, not every company is enjoying profits. Hit by plummeting oil prices, Tullow Oil fell into the red in 2015. And not every fi nancial institution has yet returned to profi tability, as evidenced by Permanent TSB’s € 400 million loss.

Given the strong growth of new companies coming to Ireland, holding onto a position in the TOP 1000 can be difficult, thanks to a constant flurry of new arrivals. While obtaining financial figures for all these companies can be difficult

– many file as unlimited, which means that they don’t disclose their financial details, while others are simply too new to have filed accounts – every year sees a host of new names enter the TOP 1000 for the first time.

For companies looking to break into the TOP 1000, John Ryan, CEO of Great Place to Work Ireland, has some salient advice – and it’s all about the people. “The bottom line is that organisations who invest in their people, and leverage their people asset – this allows them to win in the marketplace,” he says. “If you bring it all down to the one thing that matters the most, it’s trust, trust in management, and the relationship that employees have with the managers of an organisation.”

Yelp, the US internet company which came to Dublin in 2014, makes its first appearance in the survey this year, in at number 784. The website, which crowdsources restaurant and bar reviews (and currently rates almost 3,000 Dublin outlets), reported turnover of some € 33 million and has plans to grow its workforce to 100.

Surveymonkey, another US tech firm, which set out plans to open in Dublin in 2014, now offers support for its Irish and European customers from its office on Shelbourne Road. The company, which provides free, customisable surveys, as well as a suite of paid back-end programs, reported Irish turnover of some € 18 million in its most recent financial year, placing it at number 902 in the survey.

An Irish success story – even if it is headquartered in San Francisco – Intercom, the global software company, also makes its first entry in this year’s survey, at number 891. Thanks to a strong 2015, which saw it grow its revenues fourfold, we have estimated its annual turnover at about € 20 million. It is aiming for a $1bn valuation and IPO in about four years, so should continue to make its way up the rankings.