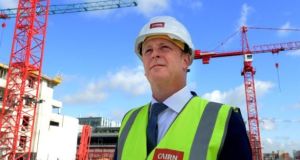 2017 was an eventful year for Cairn Homes which releases full year results on Tuesday. The €107.5 million sale of 8.6 acres of RTÉ’s Montrose campus to the home builder was described as the most notable land transaction in Dublin of the year.

In May, chief executive Michael Stanley said the company planned to sell non-core sites – those deemed too small to fit its business model. It expected to realise about €50 million from the sale of such sites by the end of 2018.

In January, however, Cairn Homes released a trading update that showed operating costs for the second half of the year had increased, a potential dud note in an otherwise promising performance.

Volumes have increased by almost four times those of 2016, it said, and the company expected to sell off 10 sites by the middle of this year.

In the full year to December, Cairn Homes had completed 418 homes, jumping from 105 in 2016, and average selling prices, somewhat unsurprisingly, had increased by 6 per cent.

Although it had guided a full year Ebitda (earnings before interest, tax, depreciation and amortisation) of between €14.5 million and €15 million, Davy said this was well behind its own estimate of €17.4 million “driven by a further increase in operating costs”.

The craft beer business never seems to lose momentum, propelled further by a report this month that showed sales rose by 47 per cent last year, now accounting for 4 per cent of beer sales overall.

The AIB research on the pub sector also showed food continues to be an important revenue earner. Sales there rose by 3 per cent last year, with pubs accounting for 37 per cent of the €2.6 billion food service market in Ireland.

There’s so much good news for the sector it warrants a celebratory pint and the Alltech Craft Brews and Food Fair (starting Thursday and running to Saturday) is the obvious place to enjoy it.

In a vibrant market, the fair exhibits the finest in beers and food of the type increasingly enjoyed by Irish consumers.

“Ireland’s largest gathering of craft brewers and distillers” is now in its sixth year and will host more than 50 exhibitors showcasing the latest innovations and trends.

“In a positive outlook for the future almost two-thirds of our exhibitors have indicated that they are planning to increase their employee numbers in 2018,” said spokesman Conor Farrell.

“Many [OTHERS ARE] also expanding their offering into the growing food tourism area through the development of visitor attractions.”