Latest monthly figures show number of people signing on has dropped to 234,900 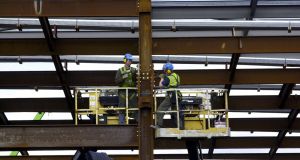 The number of claimants on the Live Register has hit a 10-year low as the Irish economy converges on full employment.

The latest monthly figures from the Central Statistics Office (CSO) show the number of people signing on dropped by 3,400 (-1.4 per cent) in February, bringing the seasonally adjusted total to 234,900, its lowest level since August 2008.

The latest register comes as separate figures this week show the State’s official jobless rate falling to 6 per cent in February.

Unemployment has fallen nearly 10 percentage points from the peak of 15.9 per cent in December 2011 during the financial crisis.

The turnaround means Ireland’s jobless rate is now nearly 3 per cent lower than the euro zone average of 8.7 per cent.

On a seasonally adjusted basis, the latest Live Register showed a monthly decrease of 2,000 men and 1,400 women in February. The number of long-term unemployed people on the Live Register at the end of February was 96,574, which equated to annual fall of 17.5 per cent.

There were 50,317 casual and part-time workers on the register, which represented 21.4 per cent of the total.

A breakdown of the figures shows craft workers remained the largest occupational group on the register, accouting for 17.7 per cent, despite the fact that the number in the group fell over the year by 8,488 to 41,725.

“Separately-released figures on labour costs and wage growth this week highlight that the much-reduced amount of spare capacity in the jobs market is exerting some gradual, but discernible, upward pressure on earnings growth,” Ulster Bank said in its weekly commentary.

1 Coronavirus: New government faces financial hole of €11bn
2 Johnny Ronan plans boutique hotel after paying €3.8m for Dublin docklands houses
3 Banks move to avert fresh arrears crisis
4 Property values yet to feel full Covid impact - Hibernia Reit
5 Working from home: New costs, new stresses and little relief
6 State ownership of airlines may be side effect of coronavirus
7 Marlet secures €33m from AIB for south Dublin build-to-rent scheme
8 HSBC board rethinks overhaul and seeks even deeper cuts
9 Property professionals must see technology as an opportunity, not a threat
10 Joint accounts: if one of us dies, can the other access the money?
Real news has value SUBSCRIBE