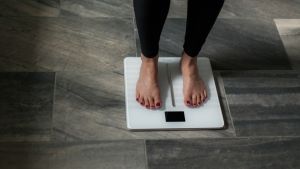 The Withings device is easy to use

There was a time when a weighing scales was just a weighing scales. It was something you occasionally stood on, after brushing the dust off it, noted the result and promptly forgot about it. The rest of the time it stood in the corner of the bathroom, unused and forgotten.

But like most things, technology has transformed the humble scales into a more high-tech offering.

The Withings Body Cardio is just one example of how far the humble weighing scales has come. The sleek black (or white, depending on your aesthetic choice) scales has a layer of tempered glass, a large display and sensors inside its body to accurately measure your weight.

If you supply some basic information on set-up, you will also get your body mass index (BMI) calculated and displayed on the screen, along with your weight trends, pulse wave velocity (to indicate heart health), and the usual body fat percentage, body water, muscle mass and bone mass.

The device feeds all your data into the Withings Healthmate app, allowing you to track your trends over time. It syncs wirelessly to your phone via wifi, but it also supports Bluetooth and, if no sync is available, you can store up to 16 readings in the scale.

It supports up to eight different people, and it automatically recognises users rather than requiring you to to switch between profiles – an important feature if you don’t want your app to suddenly declare you’ve lost 45kg in one fell swoop because one of the kids has decided they like the way the scales lights up.

The Withings device is easy to use: once you’ve gone through the short set-up in the app, you step up on the scale, lining your feet up with a horizontal strip on its glass surface. You stand there for 30 seconds to allow the device run through its measurements.

According to the maker, the scales is just as accurate on carpet as it is on a hard surface. There are no deep-pile carpets around my house, but it seemed to do fine on a relatively thick rug.

The display will show you your weight trends before reading your heart rate and also pulse wave velocity, a measurement that can indicate risk factors for high-blood pressure and other issues in the future.

The app breaks it down into an easy-to-read measurement, colour-coded to make it even easier to decipher.

Withings claims it is highly accurate at measuring weight, and that claim seems to be borne out, in my case at least. However, it is impossible to know how accurate the body scans are without dropping into the doctor for medical tests.

Looking at trends over several weeks on the scales, it was clear that there was little variation that would indicate something was going horribly wrong. The bone and muscle mass readings were stable, and the water measurements just confirmed what I already knew – I need to drink considerably more water.

The Healthmate app also makes it easy to customise the scales. If you are not interested in getting local weather reports on your scales – yes, that’s an option – you can remove it from the list, or rearrange it to suit your priorities. And to cap it off, the battery is rechargeable.