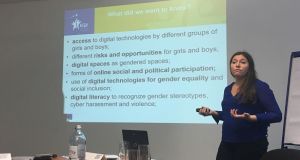 Blandine Mollard of EIGE’s research and statistics unit presented the initial findings of the digitalisation study in Vienna.

Pressures pushing Irish teenagers towards harmful behaviour such as sharing intimate pictures without consent, and a culture of “toxic masculinity” are highlighted in new EU research on the risks and opportunities of digital technologies.

Carried out at the request of the Austrian presidency of the Council of the European Union by the European Institute for Gender Equality (EIGE), Gender equality and youth: opportunities and risks of digitalisation looks at how digital technologies can be used to promote gender equality and also focuses on the gender-related risks of digitalisation for young women and men.

Quantitative research from EU sources was complemented by focus groups in 10 EU member states, including Ireland. The researchers used the #MeToo movement and the use of digital technologies in intimate relationships as their two key discussion themes.

The researchers note very little difference across the EU in terms of a gender gap in digital skills. However, a gender gap does emerge in the confidence levels of young women and men in terms of how they view their own abilities in this area.

The researchers also warn that young women are more likely to censor themselves as they take into consideration possible backlash for their online political participation.

Blandine Mollard of EIGE, who presented extracts from the research to journalists in Vienna, said that across the EU, young women were “lagging behind” in terms of comments and contributions online.

“We are concerned that this withdrawing, this self-censorship, is going to strongly accumulate and could prove a really substantial barrier in young women accessing leadership positions, for example, in any industry really but especially in political representation.”

This is higher than the EU-28 average of 16 per cent for young women, but much lower than the 20 per cent average for young men of that age at EU level.

Ms Mollard said there was no qualitative information that could directly explain or help contextualise the low level of political participation for young men in Ireland.

“But what we can see in the Irish context for the focus group discussions very clearly . . . is that political matters, political activism, mobilisation, were much more discussed among the girls, than boys,” she told The Irish Times.

“They discussed . . . at length the kind of pressure that peers apply on boys, whether online if it’s taking a digital dimension, or in the physical world, and how there is a continuum between this type of pressure.”

Ms Mollard said the teenagers in the Irish focus groups also raised the question of “double standards” for girls and boys on issues such as “sexting” and pressures to share intimate pictures without consent.

“We see in many countries . . . the pressure towards harmful behaviour, toxic masculinity coming across very strongly in several focus group discussions, especially from Poland, Ireland and Hungary, ” Ms Mollard said.

She said young boys mentioned how they had seen nude pictures “being used as social currency or something to brag about and to be able to score a higher social status among their peers”.

EIGE is the EU’s knowledge centre on gender equality and is an autonomous body of the European Union.