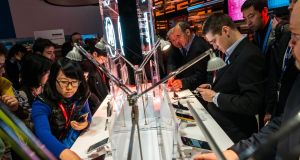 Mobile World Congress is just around the corner, so we’re about to find put exactly what the mobile world has planned for the year.

While CES (Consumer Electronics Show) in Las Vegas kicks off the tech world and lays out plans for everything from home appliances and TVs to the internet of things and wearable tech, MWC offers a more in-depth look at the mobile market.

Run by the Groupe Speciale Mobile Association (GSMA), it has been the stage for the official unveiling of Microsoft’s Windows Phone 7, HTC’s virtual reality Vive system and numerous flagship handsets over the years, firmly establishing itself in the tech world’s calendar.

It ma have lost out on some of the bi announcements to CES in the past, but already there have been teasers of products, with Samsung expected to debut the S7 ahead of the show, LG looking at the G5 and the Huawei P9 predicted to make its debut. Creating a buzz around the showis key, and new product releases are a major part of that.

The Chinese manufacturers will have a large presence at the show, with ZTE, Huawei and Xiomai all on the list of exhibitors, with a few more firms to show.

The company has been written off more times than we care to remember, but as of right now it’s still hanging in there.

The Blackberry Priv was reasonably well received, and although no one really expects the company to return to the dominance it enjoyed pre-iPhone, perhaps it still has a couple of years left in it.

But it’s not just about mobile phones anymore. Mobile World Congress has evolved with the industry to include everything from health and fitness to home technology.

This year’s event is themed “Mobile is everything”. In a blog post ahead of the show, Forrester analyst Thomas Husson said MWC and CES had more in common than ever before.

“Both events are increasingly centred on tech innovation and the internet of things. MWC is more global and more focused on the business impact of mobility while connected TVs and tech gadgets are more common in Las Vegas,” he wrote.

“For me, the 2016 edition’s tagline means that mobile is still driving the most powerful change in consumer behaviours ever.

“It also means that mobile will remain at the centre of new connected experiences.”

At the Las Vegas show, there were plenty of activity trackers, sleep monitors and other devices to keep track of your health and wellbeing.

There should be plenty of activity around the wearable pavilion, with everything from smart watches and glasses to smart fabrics demonstrated.

Michael O’Hara of the GSMA points out that we are embedding mobile in everything in our lives - which makes the show the perfect place to showcase the latest developments.

Oculus began selling the Rift headset earlier this year, but there is more to come, with HTC, Sony set to unveil its PlayStation VR and Google said to be working on a new headset to work with smartphones.

At Mobile World Congress, HTC will be demonstrating the latest version of its Vive headset.

The device has had some tweaks since initial previews, so the show will be a good chance to catch up with the updates.

You can also expect a lot of wearable headsets designed to press your mobile phone into service as a screen, making it a more budget-friendly way to get into VR.

There is already the Samsung Gear VR to get to grips with, which uses the Samsung Galaxy S6, S6 Edge, Note and Edge Plus handsets as a screen.

At CES, there was much made of how connected devices would soon infiltrate everything from your home to your car, allowing them to communicate through more open platforms than before.

Expect more of the same from Mobile World Congress.

“Smartphones have become a sort of black hole integrating a huge array of sensors, but mobile is now exploding back out to our environments.

“Sensors and connectivity are expanding beyond smartphones, on our wrists, bodies, cars, TVs, washing machines, but also in invisible places in buildings and the world around us,” Forrester’s Thomas Husson wrote.

“While there are lots of discussions about mobile simply being a subset of this broader internet of things revolution, I believe mobile is the key to unlock IoT.

“We will hear a lot about this theme at MWC.”

We may only have 4G a matter of months, but already attention is turning to the next generation of mobile technology.

The show is expected to plot the move towards 5G, demonstrating some of the technology we can expect to see in the coming years.

O’Hara expects a number of 5G devices to be demonstrated too.

Intel will use Mobile World Congress to outline the path to 5G, and how it plans to accelerate the move towards new, more efficient network technology.

The European Commission will also be holding an event to discuss the impact of 5G on digital society and the digital economy, with panellists from Ericsson, Huawei and Nokia taking part.

Meanwhile, attendees will get a glimpse of how that new technology may work when South Korean company SK Telecom demonstrates the first functioning 5G at the event.

Mobile World Congress: Five things you may not see

With the Lumia 950 and 950XL only just out of the gate, it’s unlikely Microsoft would replace the devices so soon with another major launch. The Lumia 650 has also just been released, so MWC may see more fleshing out of the Lumia line.

Wearable tech is expected to be huge at Mobile World Congress, and while we know Google is planning a new version of its Google Glass, when exactly it will reach that is anyone’s guess. A recent patent application for a foldable headset has surfaced, indicating the way Google may be thinking for future Glass projects.

The Xperia Z5 has barely had a decent run in with the mobile market, so any move by Sony to announce a new flagship device would be a little premature. Instead, we’re likely to see more wearables – Sony is currently pushing its Band 2 – and possibly some Xperia tablets.

The Russian company was kicked out of Mobile World Congress amid a controversy over its choice of entertainment for show attendees in 2012. A ban for the following year was served, and as of the time of writing, the firm isn’t on the attendee list.